So a ballhawk like myself would have to get there extra early right? Well, I didn’t. I set myself up to get to the ballpark at 5:30 but because of the MTA’s modified 1 train schedule on weekends which has it not working from my station to the stop before Yankee Stadium. In a nutshell, I got to the ballpark at 6:24, my ticket blew away into the street as I was told to take out my phone. Not a good day to that point.

Sorry for the lack of pictures during BP itself but I was in a frenzy trying to get a ball considering all the previously mention factors but I did manage to get a picture as I entered:

That managed to calm me down some but don’t let it fool you, the left field stands were absolutely crammed considering how big they are. Actually, I shouldn’t say that. There were more competent people than I expected. In Citi Field on the weekends it is actually easier to snag baseballs because everyone crams in the front row and there are no ballhawks to be found. Here, you had Zack Hample, two other people who looked like they knew what they were doing and a whole mess of roadblocks in the guise of fans.

From this, it is no surprise that my first ball was thrown. Seeing little hope for Home Run snags, I headed over to foul ground to get a ball from the pitchers warming up. I initially lined up behind Neftali Feliz because of the Spanish factor but moved onto new pairs as the former pairs didn’t throw me a ball.

Finally, Mark Lowe saw my Ranger’s gear and tossed me his warm-up ball for Ball #1 on the day. I was relieved. It seemd like the perfect set of circumstances to get shutout.

I then moved back into fair territory and as this happened a ball came to Neftali Feliz. He threw it back but I managed to get in the words, “la proxima, por favor?” which translates to, “the next one please”. Within five minutes another ball came to him and he lofted it to me for Ball #2 on the day. I was ecstatic. I had just matched my season average in Yankee Stadium on the weekend.

After this, I moved over to pull city in left field expecting security to come down any minute asking for people’s tickets. That’s when a person I identified as Adrian Beltre: 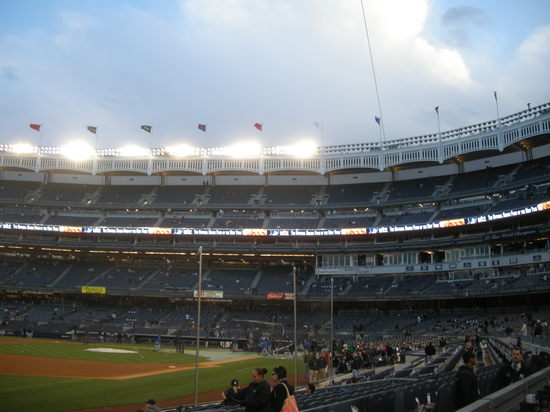 hit a Home Run a section to my left. I got there with plenty of time but from the corner of my eye it looked like someone was camped under the ball. I didn’t want to reach in front of the person so I backed off and prepared for a ricochet. But I then saw the person back off as they seemed to be afraid of the ball. I quickly put out my glove and snow-coned the ball. For those of you just following, this is a big deal because I am HORRENDOUS at tracking fly balls and catching them in the seats.
I moved back to my spot and after a whole five minutes Matt Harrison tossed me a ball for #4 on the day (being the Rangers fan that I am). This was by far my most efficient day snagging five balls in fifty minutes of Bp.
That’s right, five. First, I did a manuvering job to not get kicked out by security. Ironically after this message aired on the big screen: 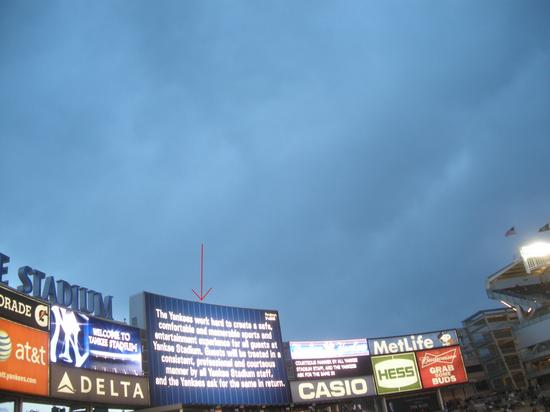 It is under the red arrow and the ironic part says says, “Guests will be treated in a consistent professsional and courteous manner by Yankee Stadium Staff an the Yankees ask for the same in return.” Ha!
Then, Bp ended:

I stayed by the Ranger’s bullpen as Alexei Ogando warmed up. As he played catch the bullpen catcher, Josh Frasier, went into the bullpen and tossed the hit balls to the bleacher creatures. After being encouraged, he tossed “one up to a Rangers fan”.
I knew that I wasn’t going to be getting anything else until gametime So, I took my spot in foul territory and look who showed up right in front of my eyes: 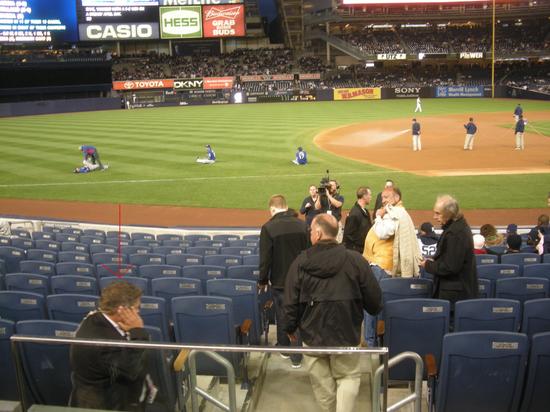 Under the red arrow would be ESPN’s John Kruk picking his favorite seat of Yankee Stadium as he will every Sunday Night Baseball.

Here he is doing the actual segment: 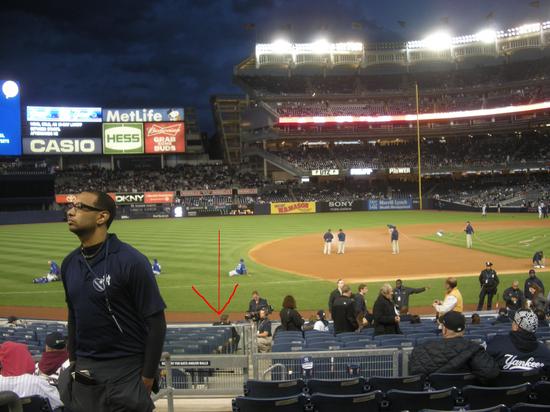 The listed attendance was 40, 811 and for once it felt like that. This picture is from before the game and it is still pretty full:

The snagging room was as good as it ever will be because of the brief spurts of rain/lightning.

The view to my left: 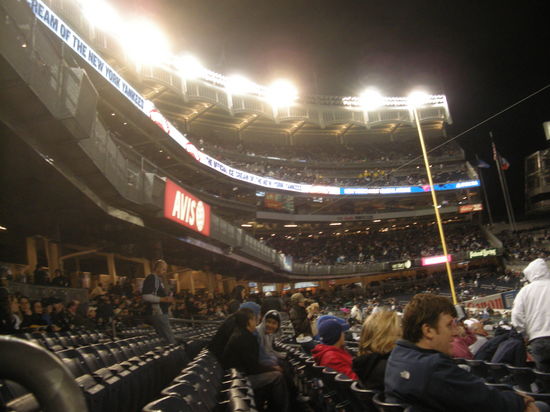 The view to my right:

Sadly, the only ball that came within 100 ft of me went into the second level just as I thought I had it caught.

The game as all I have gone to at Yankee Stadium was indeed exciting. The Yankees won again by scoring a run in the eighth off of Arthur Rhodes.

As I left, I saw the set atop a parking garage of Baseball Tonight: 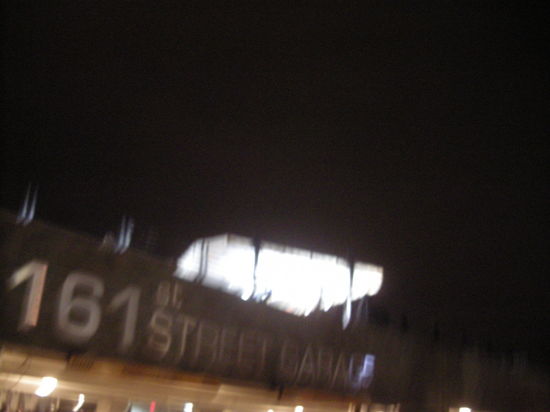