I would rather forget this day as quickly as I possibly can. This three game series was supposed to be my redemption for a horrible trip to the mid-west (snagging wise). Just about everything went wrong that could have gone wrong. Let’s go through the list shall we.

1. My bus broke down and I had to switch buses causing a 30 minute delay at the very least.

2. I got to Washington 15 minutes after the earthquake that day and as a result the roads were blocked off and I arrived to Union Station (our final destination) at 3:30 which was 6 hours after we left New York. Due to the earthquake, Union station was closed and I couldn’t take the metro from there. Here is the crowd gathered there:

3. I had to walk about 2 miles with my backpack that was packed like a suitcase, in 90+ degree heat in my long pants and sweatshirt that I had on because the bus is always pretty cold, to the nearest train station and get on that. Though, I can be thankful I didn’t get to Washington like 30 minutes later because this was the traffic:

4. After finally getting on the train itself and riding my initial stops seamlessly and slowly, I ran into a bit of a crowd at my transfer station:

The crowd was like ten people deep all the way across a platform that was about 500 feet wide. So, it took a few trains for the 10th person back to get on a train because only so many people can fit on one train. Given the fact that the trains were running at reduced speeds for workers to make sure the tunnels were structurally sound and every other train was different at this same stop, it wasn’t a surprise that I got to the ballpark an hour and twenty minutes after I left Union Station at 4:50.

5. Due to the delayed metro etc., Nationals Park was understaffed and made us wait until 6:40 to enter the park. For example, here is a guard who usually supervises the whole let-in-the-people-at-4:30-and-make-sure-everything-goes-smooth actually setting up a gate:

6. The gates didn’t open until 6:40 which was 20 minutes before the game was scheduled to start and this is what I felt like: 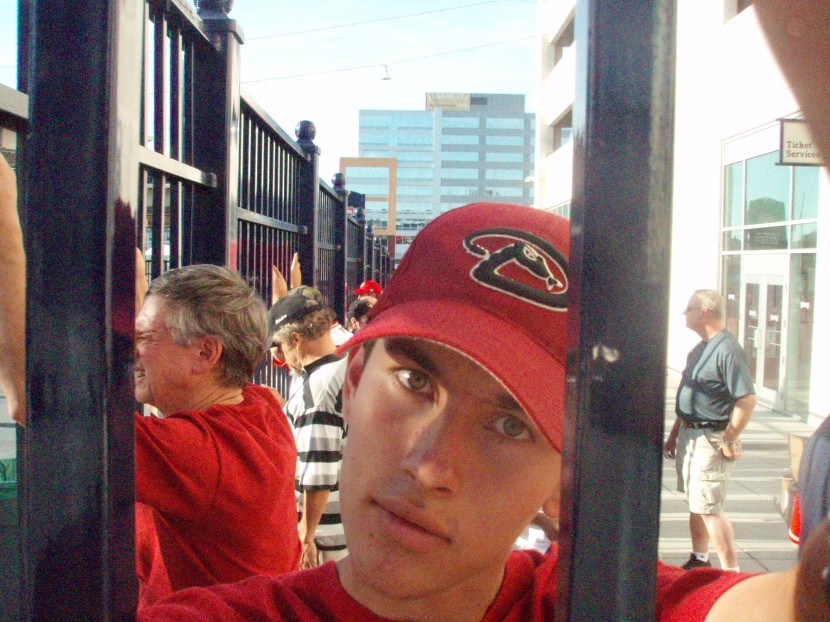 Oh and want to see all the productive work I was getting accomplished:

I took the picture with some thought process in mind that I as going to explain here but it was along the lines of: “Usually that sign says WELCOME TO NATIONALS PARK but the fact that the gates aren’t open makes the sentence WE COME TO NATINALS PAK” For those who don’t know, the Nationals had a jersey mistake a few years ago where Majestic Athletic actually  spelled their name as “Natinals” on the jerseys of Ryan Zimmerman and Adam Dunn. Since then, it has been a running joke in baseball and beyond to call them the Natinals whenever they are trying to be put in a negative/mistake prone light and it as interesting that the bars left this message. I know it’s a bit confusing but it made sense in my head at the time. Oh and the “we” that the modified inscription was referring to was this whole pack of people that came to the ballpark but were still waiting to get in:

7. While I was at the gate waiting for it to open, I got into a discussion about snagging baseballs with a kid who was about 10 and with his dad and got ridiculed by him for only snagging two baseballs at US Cellular in my last game.

8. The final and most painful of the day’s misfortunes was during the game itself. So of course I will take you step by step through how exactly I messed this up. First of all, the video of this situation is here. It would be a video of Sean Burroughs’ first Home Run in five years due to substance abuse problems, which also happened to drive in the only two runs of the game. Now this is no Josh Hamilton story but it would have been nice to catch part of such a nice story and had I, who knows, he might have asked for it back because it meant so much to him.

Anyway, I will show you what to look for in the video.

1. Seconds 3-7 show me running across two sections towards where I thought the ball was headed, the ball hit off the hands of a person to whom the ball was hit, hit off my hand, bounce into a seat in the row in front of me and roll me reach down to grab it. Here I am beginning my run to the ball:

I apologize for the blurriness but this is from the video I linked to and the camera is moving. The arrow on the left is where I was sitting and the arrow to the right is pointing to the blurry reddish figure as I was wearing my  D-Backs jersey. This next screen shot shows the moment about a half a second before the ball touched down: 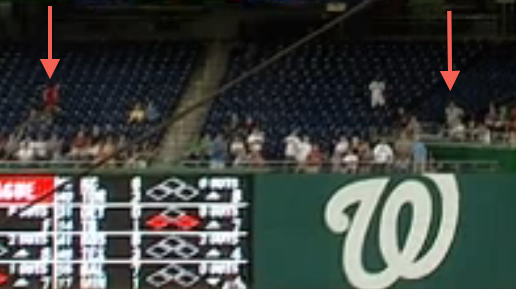 The left arrow would be pointing to me and the right pointing to the guy off whose hands the ball bounced. Here the arrows represent the same things as they did in the last picture but it is while the ball is bouncing off of my hand:

2. Seconds 12-13 show the person in the row behind me holding the ball up:

The left arrow would be the guy with the ball in his seat and the right arrow would be me still looking for the ball. What happened was that the ball fell into the seat and I started looking for the ball in the seat but when it wasn’t there I started looking in the row in front of the seat and so forth when I noticed that everyone was looking behind me. This two seconds or so on the video actually document me looking at their faces and turning back to come to the sad realization that I had completely missed the ball. Let me put you in my head a little further by explaining how confused I was at this moment. I would have understood how the ball ended up in his hands but it had been traveling forwards and the person who was in possession of it was sitting down. I had no idea how this happened until I looked at the tape and saw that….

3. Seconds 48-54 show a replay of what happened in the seats and reveal this:

If you are confused as to what you are looking at I don’t blame you. the right arrow is just to show where I was. You can sort of see my maroon-ish jersey peeking out between the bald guy’s arm but the important thing is the left arrow, which shows the guy who ended up with the ball reaching through my legs to snatch up the ball. What I figured out later was that the ball was indeed wedged in the seat for how brief a moment but when I or the other people converging on the ball hit the seat towards the field the seat created a ramp of sorts for the ball and it shot through my legs just as I was searching for it in the seat.

9. Oh and there was something the camera didn’t pick up: the guy threw the ball back. Why would you go through all that effort to get the ball if you’re just going to throw it back onto the field.

By the way, here is the path I had to take to get to the ball in the first place:

The two connected arrows show the path I ran and the lone arrow points out the guy that ended up with the ball.

I don’t want to say, though, that it was just a day of bad breaks because there were two positives that happened.

1. I did get to see the Nationals top three prospects get honored and have their first taste of stardom: 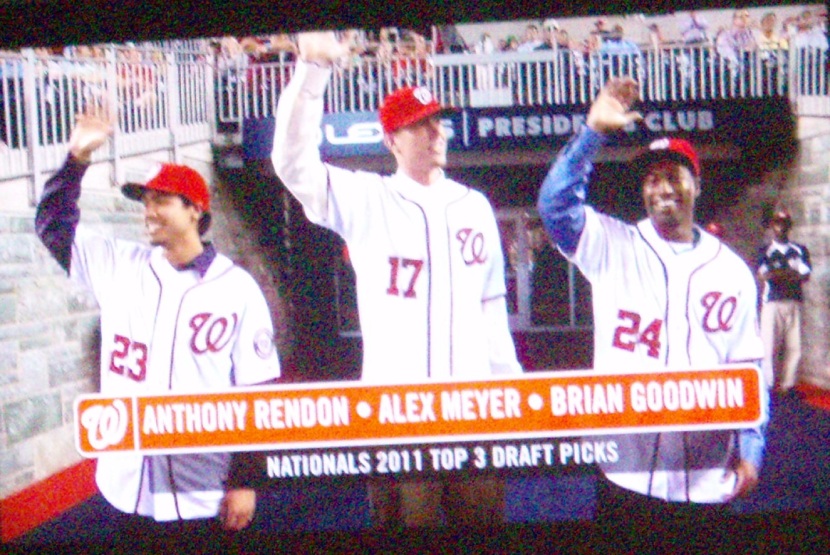 2. There were people that saw my effort. This group of four: 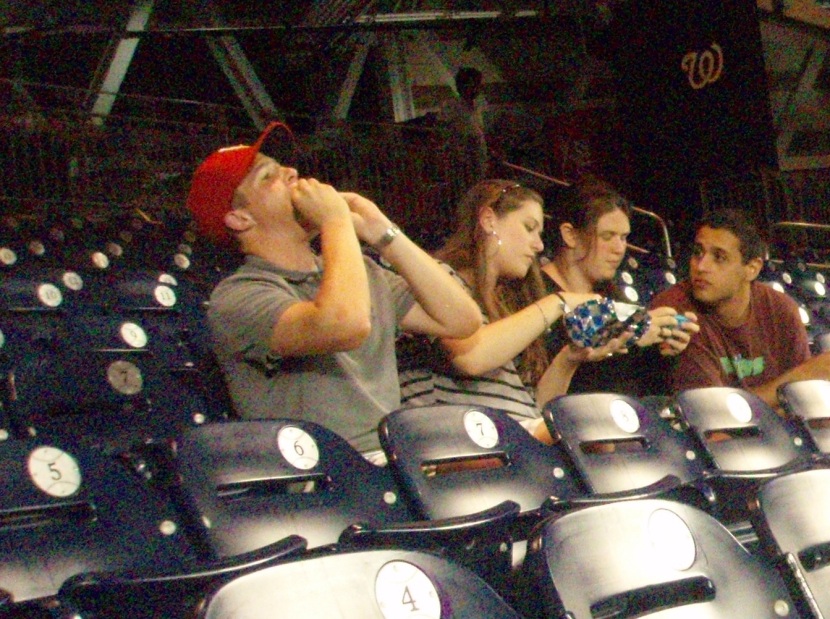 commented a few times on how far I ran and what an effort I had given and eventually gave me this in the ninth:

Apparently they had gone to the Nats’ team store and bought that for me. It was a very kind gesture and as they say made my day. The end.