You may remember, if you read semi-regularly, that my high school team played at the Myrtle Beach Pelicans’ stadium fairly recently. If not, here’s the link to the entry. Well, this was now our second game in a season playing at a minor league ballpark. It’s pretty cool to play in a minor league stadium period. To do so twice in a season is fantastic. This time, for those who don’t know where this ballpark is, it was the Staten Island Yankees’ stadium that we would be playing in:

I took that last picture immediately upon entering the stadium, and as you can see there were already players ahead of me. Apparently, we weren’t supposed to have entered. The gate was only open because a local network by the name of MSG Varsity was filming the game and needed to get their cameras in. We were supposed to (and eventually did after we filled out the paperwork that we wouldn’t sue the Yankees if anything happened to us) go to the visitor’s locker room.

The locker room was truly amazing. I know this because I have been to both, but it was close to the quality of a Major League one in terms of appearance, even if it was a little smallish. All the lockers had the names of the players, and the locker room was completely carpeted. Sounds amazing enough for me to take pictures, right? Unfortunately, it was here that I found out I had forgotten my camera’s memory card for the second time in four days. I guess I was freaking out about this, because the following is the extent  of my documentation of the locker room: 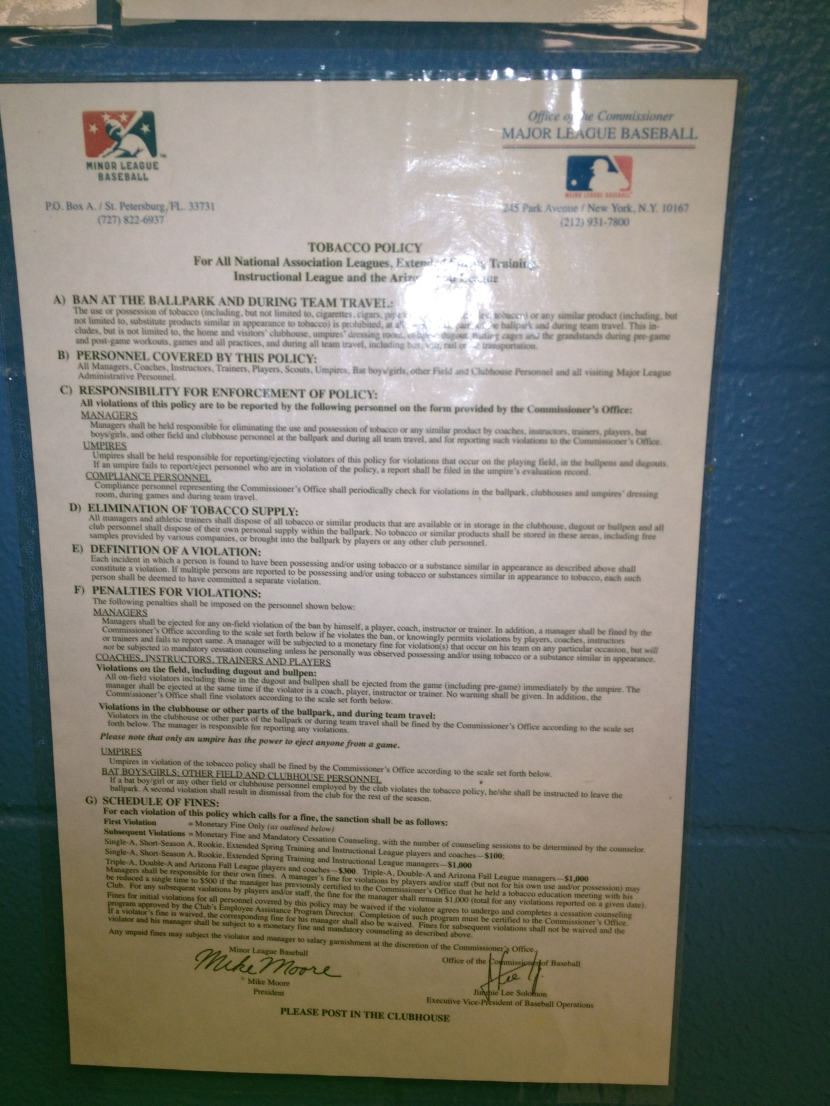 Soon after we made our way to the field, I was asked to go up to the booth to help with the pronunciation of names. Here is the view from one of the booths behind the plate:

The arrow in that picture points to the PA announcer’s mic. He was the one I assisted in this particular booth. While I was there, I figured I should probably take a picture of the massive cluster of monitors the SI Yankees people had: 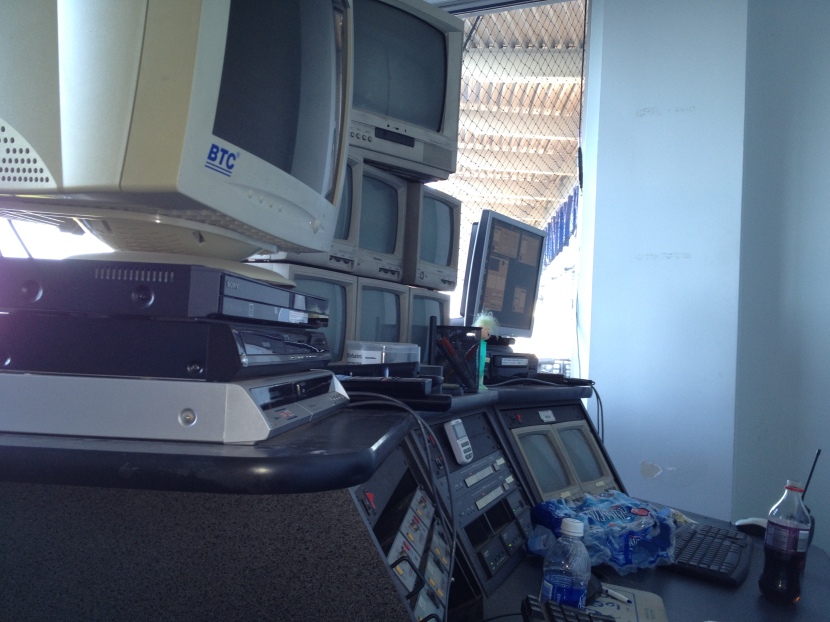 I should also add that they pulled me away when the rest of the team was paying catch, so I was watching the assistant coach who is usually my catch partner and I was glad he found someone else to throw with: 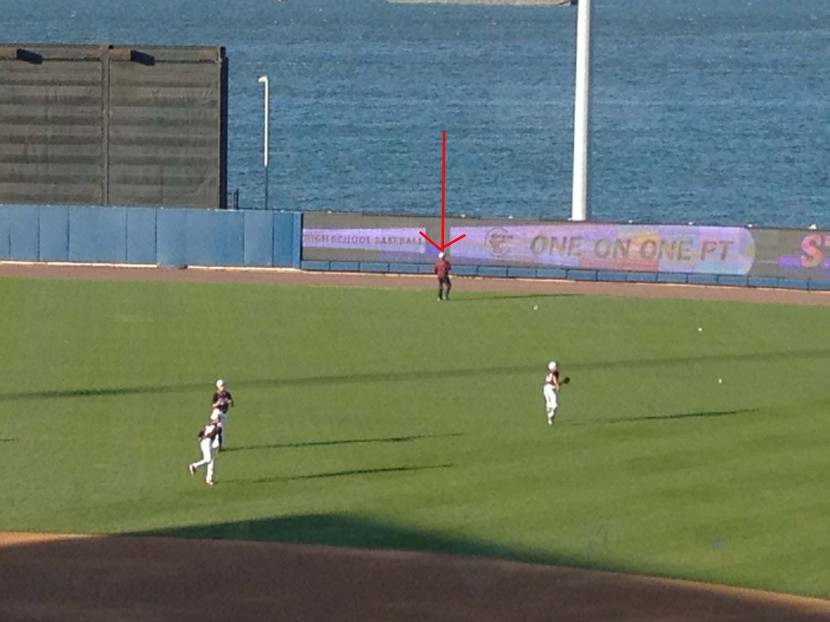 Next, I helped the MSG Varsity announcer with pronunciations in their booth; he’s the one with the red arrow above his head: 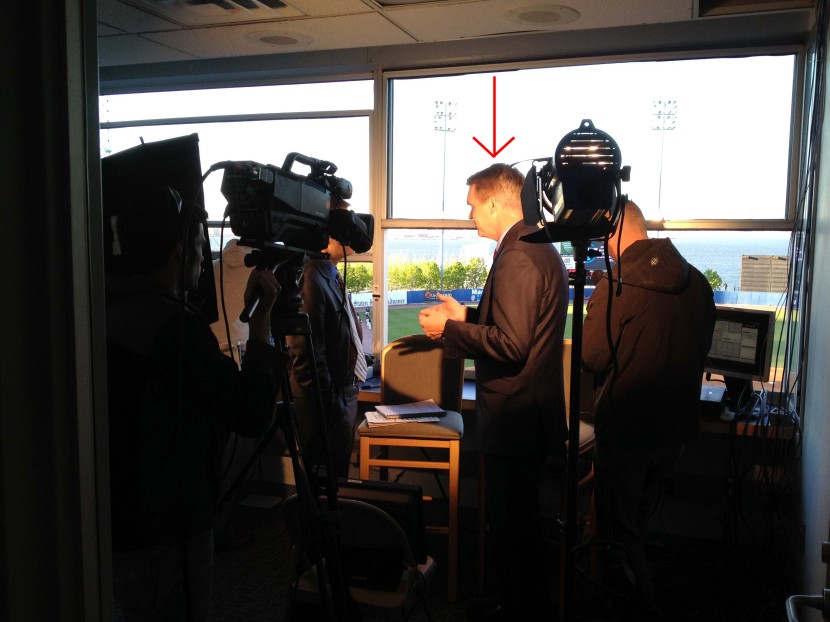 After that, I went down, and since the team was done playing catch, I wandered the seats to take a bunch of pictures. I started out by taking a picture with my camera touching the RF foul pole:

moved over to show the dining portion of the seats: 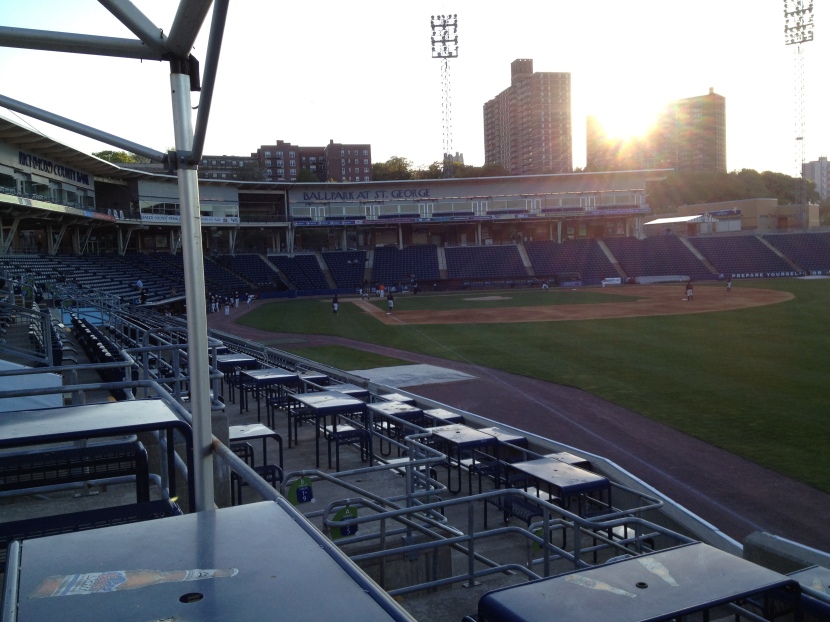 took a picture of the standing room section I would be standing in for most of the night where there was also an MSG Varsity camera present:

showed a view from the seats in foul territory down the first base line: 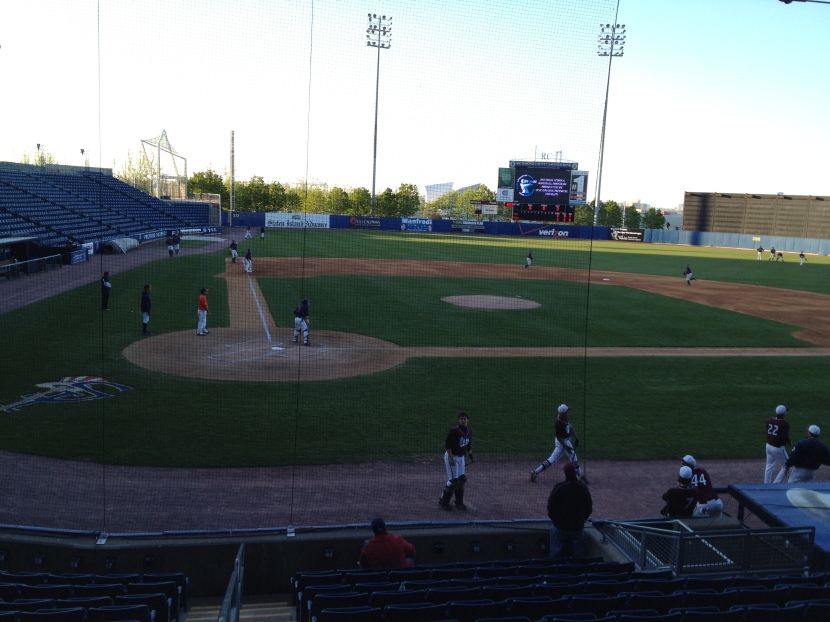 made sure to take a picture from the closest I could get to being directly behind the plate (I’ll explain later):

took a picture from foul ground on the third base side:

took a picture from as close as I could get to the foul line in LF:

took a picture of the gate 90 degrees to my right (with an arrow pointing at the bus we had driven in that is hidden in this picture): 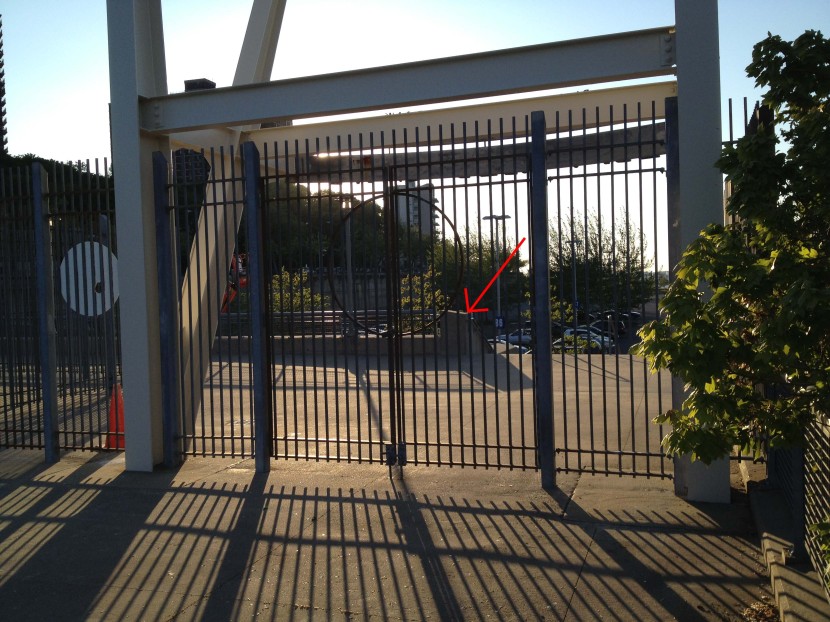 then took my last “tour” picture of the stairs that lead to this corner of the stadium from the main concourse: 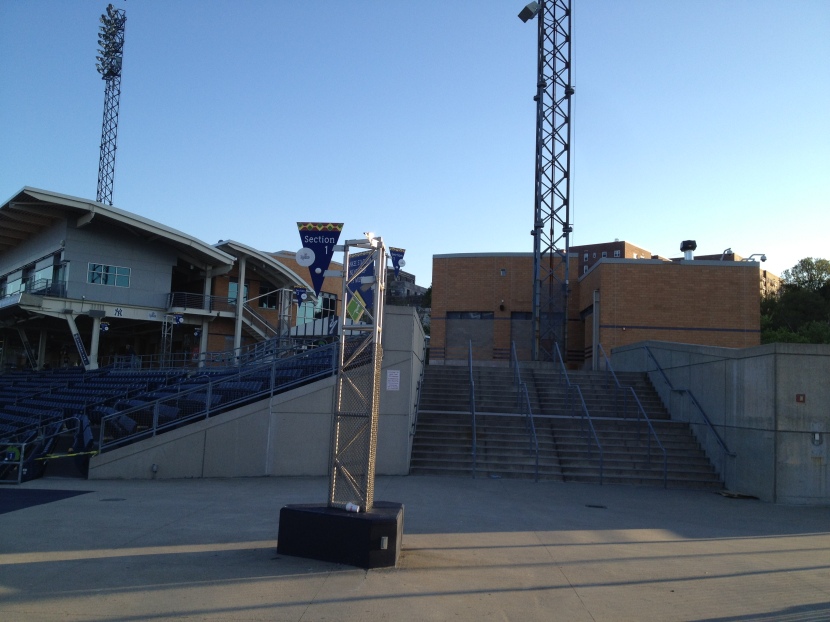 Right after that, I started my day of  “snagging”. From now on, the entry will read more like a ballhawking entry.

I found a ball in the seats as I was going back to the dugout:

A St. Raymond’s pitcher was warming up nearby, so I asked him if the ball was theirs and threw it to him when he held out his glove. A few seconds later, I found another ball in the seats and decided to keep this one. Here is a picture of it: 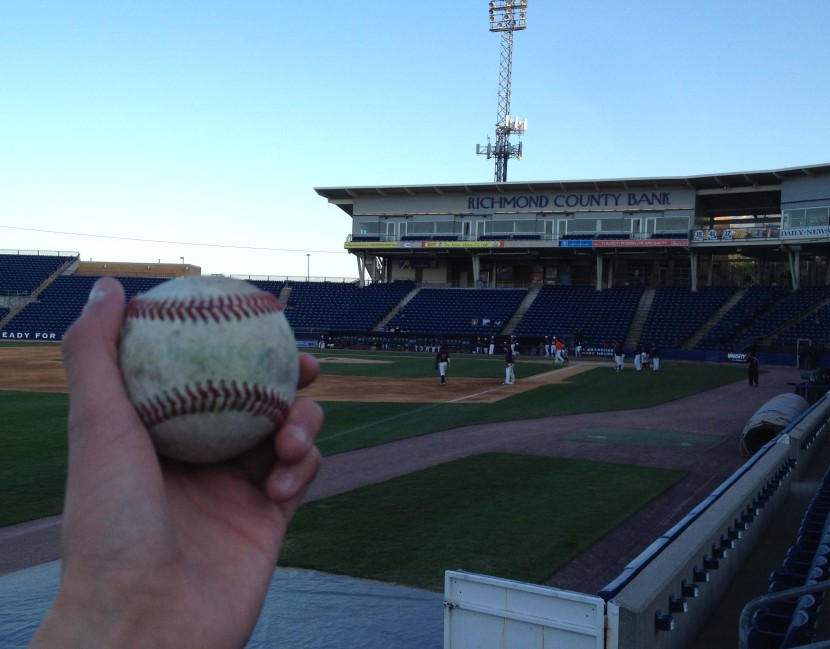 After the National Anthem and opening ceremonies, I went to a second standing room section between the first one I showed you and the dining seats:

St. Raymond’s hitters didn’t hit any foul balls, but our leadoff hitter (who is a switch-hitter batting left-handed) hit a foul ball on the first pitch of his at-bat. Guess who ended up with the ball?

What happened was that the ball went into the concourse behind me, but then bounced off the wall and back into the seats. Here is the picture of the ball that I took when I turned around to show where it came from: 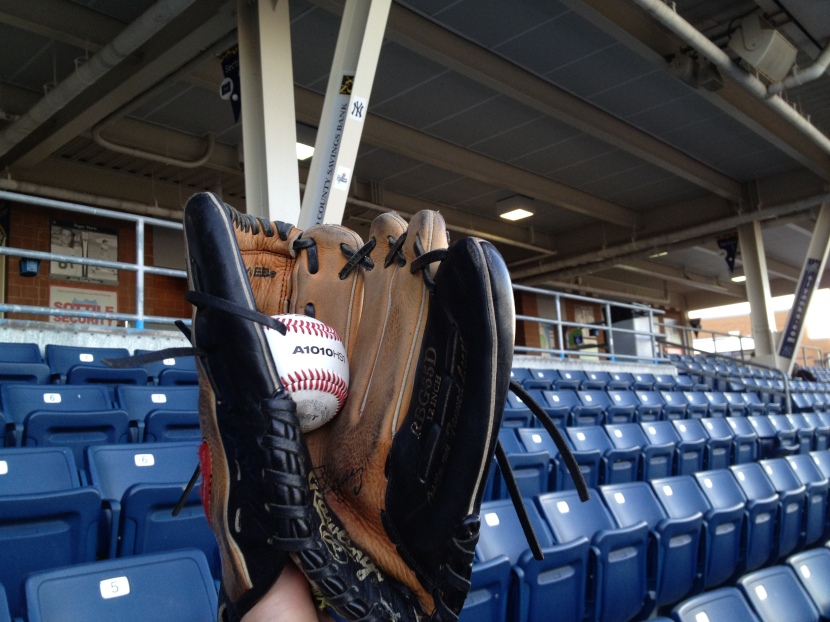 This hitter got out on the very next pitch and the next batter was a righty, so I ran over to the other side of the seats. Just as I was entering the seats, he hit a ball to my right that did the exact same thing as our leadoff hitter’s ball in that it bounced off the wall and back into the seat. Here I have the two baseballs because I hadn’t yet been able to throw the first one back (you couldn’t keep the balls):

Right after I picked up the ball, I heard and then saw three kids running up to the concourse and asking each other, “Where is it?” Do you remember Pat O’Shea from the Pelicans game I went to? Well those were his two younger brothers and younger sister. The sister would stay with her parents, but for the rest of the night, I had a friendly competition with both of the brothers to see who could snag the most baseballs.

My next ball came when a righty sliced a ball down the line. I was playing closer to Home Plate than both of the brothers, so I accepted the fact that they would get the ball. The older one then came back like I expected with a ball. However, this ball was dirty like the ones I had found in the seats before the game started. It was the second inning, so I thought that it should be a pearl still. I ran down the line searching for a ball that matched my description, and what do you know, I found it!

If you’re not keeping track, that was my fifth ball of the game. I would go on to snag two more balls in the game. I can’t remember how I got my sixth ball, but I know that I caught the seventh one on the fly in the standing room section that I mentioned earlier. This beat the older brother by two baseballs, since he snagged 5, while the younger brother snagged 3 at this game. That is all on the snagging front, but I wanted to share a few more things.

1. Here is are the blank standings in the stadium because the SI Yankees’ season doesn’t start until June 16th I believe:

2. Here is a picture from the spot I was standing for most of the night. It is of the MSG Varsity camera man, and I thought the picture was nice-ish:

What do I like most about that picture? The skyline in the background. Here’s a close-up of it: 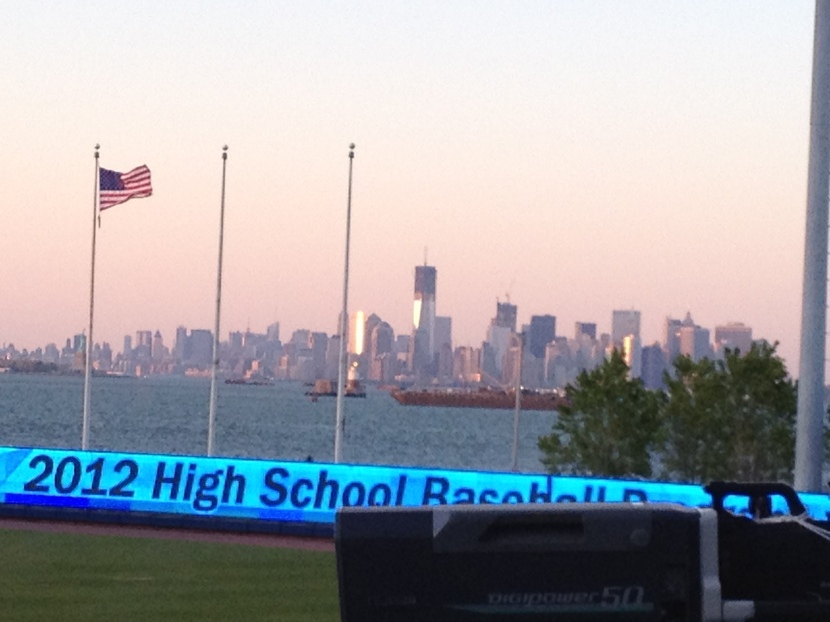 3. It was a very exciting game, albeit poorly played. The score was tied 1-1 going into the 7th inning (we only play seven innings). St. Raymond’s scored one run off a leadoff double. This meant we would have to score a run in the bottom of the seventh to win. Not only did we score one, but we also scored a second run to win the game, driving in the runs by walking with the bases loaded and hitting a sacrifice fly.