A while ago, when I was writing an entry about all the stuff I had collected over the couple of years I have been ballhawking, I found a unique ball that had all (or close to all) of the MLB ballparks. This particular ball was still in the package, so I could see who made it.At the time, I was tweeting out a bunch of pictures of what I was finding while going through my collection of  “stuff”. I wanted to mention the maker if they were on twitter, so I looked them up and mentioned that they had made that ball. The owner, who also runs the twitter account, then replied and followed me.

Later, I saw the Bergino Baseball clubhouse on a slideshow made by CNBC of the “Baseball’s Greatest Attractions”. Right after I saw this, my thought was, ” This is one of the top baseball attractions in the country, and the owner follows me on twitter. How have I not already been down there? I should really go before I start going to a bunch of games.” As many of you know, my schedule really starts up next week when I got to 8 games in 9 days, so I figured this week would be as good as any to go.

After some walking and forgetting what side of Manhattan I was, I arrived at The Bergino Baseball Clubhouse:

For the record, this wasn’t a picture I took, but rather, a screen shot of a video I took of me getting lost in downtown Manhattan. Long story short, I was planning to make this a vlog entry, but my last vlog reminded me how long a process uploading a video to YouTube is, so I probably won’t upload that video.

Once I got in, a man greeted me inside. Since there was no one else in the store, I presumed it was the owner, Jay Goldberg. I introduced myself as Mateo Fischer, and by his reaction, he recognized the name. I then spent the better part of what must have been close to two hours taking pictures and having Jay explain the different items in the store to me.

Before I get started, I must say, do check the blog’s Facebook page. I will include various pictures of the store in this entry, but there are several pictures I took that I can’t segue into and aren’t in the entry.

As you enter the store, there are the following things set-up in your path:

A game-used base stool.

Of course, these baseballs were just the ones on display; here are all the baseballs that were for sale:

Yeah, and you thought *I* had a lot of baseballs.

To the left of that shelf of baseballs, was this wall:

The items there are pretty self-explanatory, right? I should note, though, that it is not an actual glove you are seeing, but rather a wooden sculpture of one.

Opposite this wall is a wall Jay described as having different pieces of “baseball art”. I use quotations because although, he and I both consider the items on the wall art, they aren’t all what most people would consider pieces of art. You know what, I’ll just include a picture so you can see for yourself: 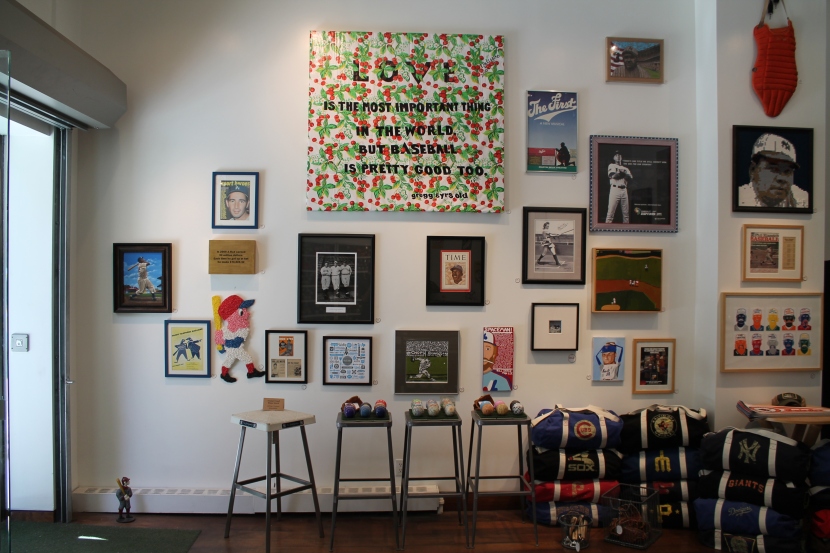 Since I’m all out of transitions between pictures, I just want to include four more things, so here they are: 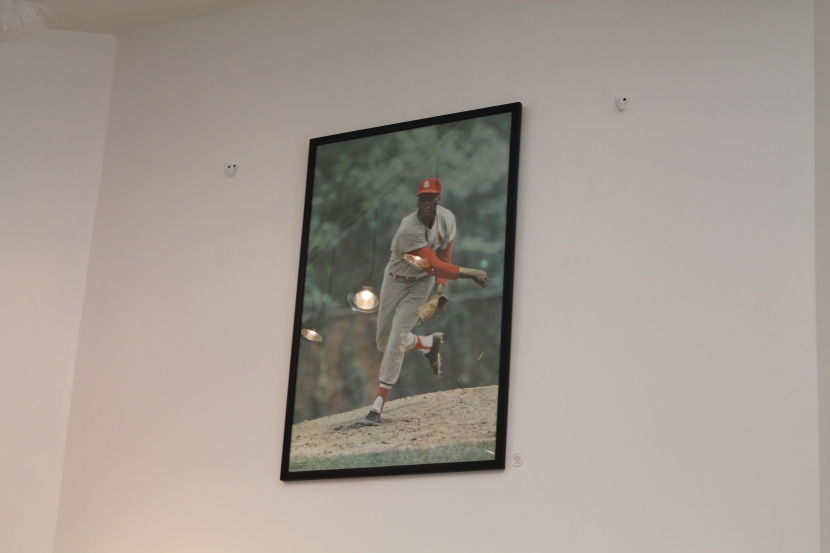 In addition to the balls they design, Bergino also makes specialty baseballs for companies or events. For example, the middle ball is for a kid’s bar mitzvah. As you can also see, there are mini-gloves that they also make. They are designed to be business card holders, but according to Jay, people get creative with their usage, e.g. as gloves for babies.

3. Jay wants Jackie Robinson to always have the strongest presence in the clubhouse- I don’t know how many pieces relate to Jackie Robinson on the “wall of baseball art”, but there are several, and here is one of them: 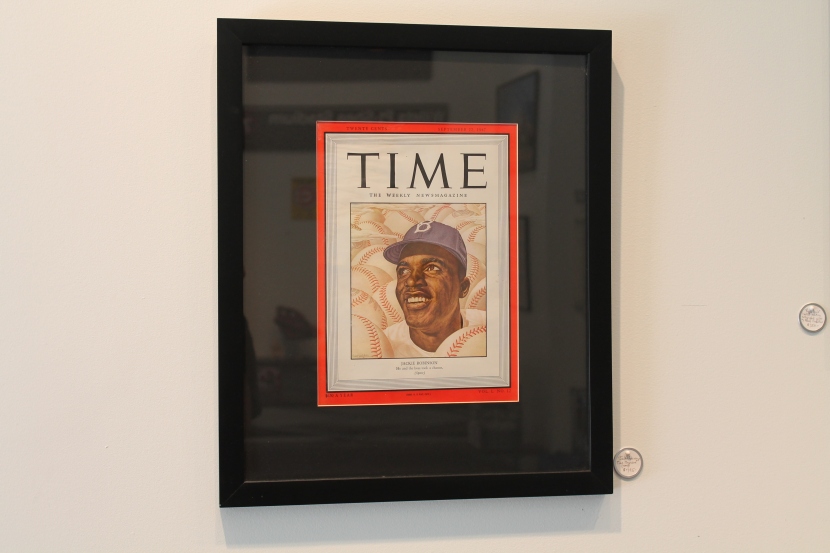 Another piece I photographed in the store relating to Jackie Robinson is this one:

You may recognize this painting, but regardless, the story behind it could very well be more interesting. The artist is a French woman who came over to America. She had never seen baseball before, but she went with a friend to a Mets game, and although she had no clue what was going on, she loved the energy in the stadium. She then became a baseball fan, and now, she only paints about baseball (I think I got that last part right, but I may have one of those Andy Pettitte “misremembering” incidents).

Anyway, that’s it. I bought two hats; an Oakland A’s hat and a Bergino hat, and because I had told my schedule, and he knew I would be at 4 different stadiums this week, he gave me a bag tag for free that is on my backpack as I write this entry: 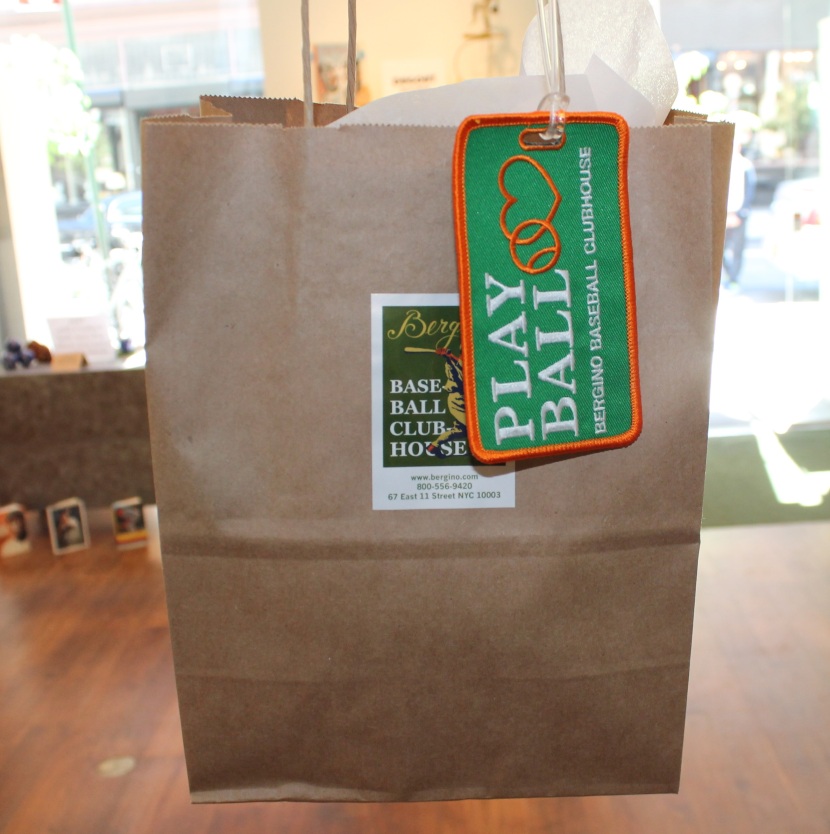 I then got a picture of Jay with the store before I left:

(Notice the TV in the corner. As far as I can tell, it is turned on constantly to MLB Network.)

That was it. It was a really great experience. It is a really great store for any baseball fan contrary to what you would think for a store that really isn’t that big. Again, I urge you to check the blog’s Facebook page, which can be accessed by clicking on the link in the sidebar over there —>. There are far more pictures, and as I always do with pictures that have an entry attached to them, I add a caption for almost every picture.