It was the beginning of a new era for me: 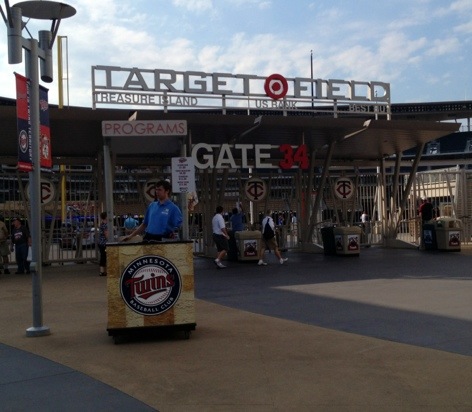 Walking up to Target Field, the best word I can think of to describe the feeling is surreal. I just could *not* believe I was there again. It defied all logic. Why go to a bad ballhawking stadium for the second time in two years? Target Field is the kind of place you visit to say you’ve been there and then stay away for as long as you can.

Once I got to the gates, two people waved at me. It was just kind of like “Whoa, what’s this?” One I actually recognized from the pictures he had of himself on his blog and that was Paul Kom. You can vaguely see him towards the right of the last picture in the white hat. He leaves comments here as paaoool123.

The second person was Tony Voda. Unlike Paul, I had no idea of his existence until a couple days prior, much less an idea of what he looked like. When Zack Hample announced in his blog that I was going off to Minnesota for college, he was one of the many people who contacted me regarding the fact. He left a comment on this blog saying that he would like to meet up some game.

First of all, I would like to say that when a ball plummeted into the gap outside the stadium between the parking garage and the rest of the walkway, Paul and I just wanted to see where the ball had landed. Meanwhile, Tony was already running after it. Apparently, that gap has Interstate 394 under it. When Tony came back with the ball several minutes later, all three of us took a picture together: 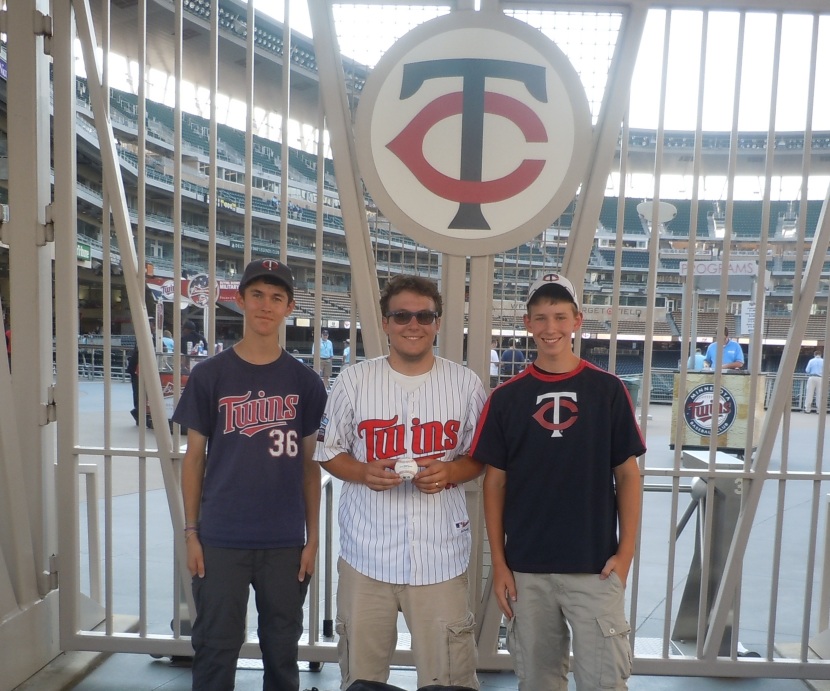 That would be me on the left, Tony in the middle, and Paul on the right.

At the gates, we did two things: awaited any balls that might’ve bounced to the gates (Paul nearly got one), and divvied up where we wanted to go in the stadium. Paul took the Mariners dugout, Tony took the Twins dugout, and I wandered all over the place.

My first stop was the third base foul line:

When I got there, Jesus Montero picked up a ball, and I decked out in Mariners hat and sweater (even though it was really hot), asked him for a ball. For whatever reason, he completely ignored me and tossed it into the outfield seats.

So, I made I stop along the third base foul line seats, but I eventually ended up in left field seats where I ended up getting Jason Vargas to toss me a ball: 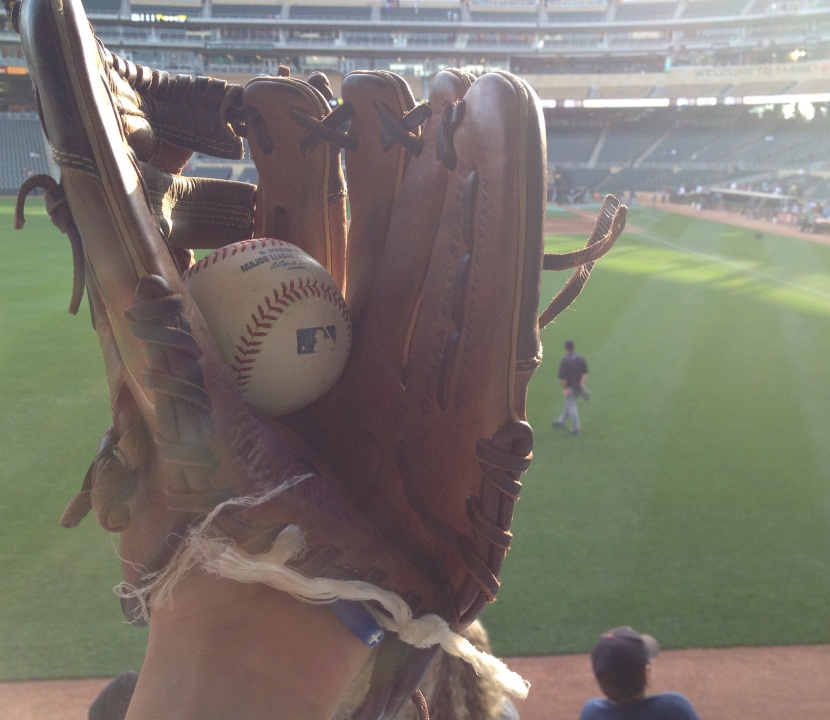 At least I think it was Vargas. I stupidly didn’t take notes about this game, so I’m basing everything on memory. Anyway, I then headed over to the “section of death” in right-center field. It’s the section of death to myself and other ballhawks (I have come up with the name, but others have agreed with the sentiment.) because it’s four rows of seats to begin with, and the overhang makes it so you can only really catch a home run in the first row or two. In addition to that, there’s a flower bed in the front of the section which means a player has to be about five-ten feet from the wall for you to ask him for a ball.

Anyway, right as I got there, a player overthrew a kid, and the ball flew into concourse:

I then said that I would give him the next ball I snagged.

A few minutes later, I asked Stephen Pryor for a ball, and when he tossed it to me, I gave it to the kid. His sister then hugged me, which was…unexpected. Just to give you an idea of how the flower beds affect one’s sight, here’s a picture of Pryor standing 60+ feet away from the wall: 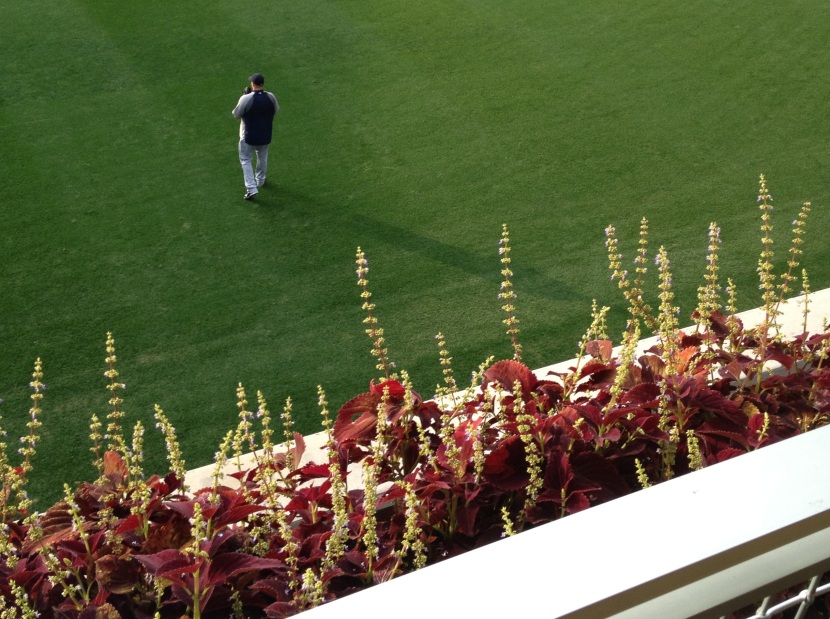 See? Unless you want to be talking to a bed of flowers, you either have to hope a ball stops just the perfect distance from the wall, or hope the player doesn’t throw the ball right when they get to the wall.

I then pretty much stayed in the right field seats for the rest of batting practice, where the offensively anemic Mariners didn’t send anything into the stands:

I then met up with Paul in foul ground along the third base line.

From there, we both headed over to the left field seats by the bullpen. At that point, he had snagged four balls. He ended up with seven by the end of the day. But don’t take my word/ account for it, right….here is the link to his entry about the game.

When we were sitting there, I saw the Mariners bullpen coach, Jaime Navarro walking to the bullpen, so I put on my Mariners sweater and hat. Once he was picking up the balls that had been hit there during batting practice, I asked him for one. This was the result:

What I hadn’t noticed was Paul had also stood up and had grabbed his camera. Here is the five-second video he took of me snagging the ball:

Thank you to Paul for that.

As for the game, I won’t really talk about the result, but I’ll say Todd Cook was made happy by it. This was my ticketed seat:

but I decided to stay out here for the majority of the game:

I can’t say for certain, but I think I’ll spend most of my time at Target Field out there.

However, as I suspect will be the norm for most of my time out there, nothing was hit even close to the section. After the game, I met up with both Paul and Tony (who also wrote an entry about the game, whose link can be found right….hiaaaagh.) by the dugouts. We then walked to the exit together before saying our goodbyes. I’ll probably see Tony again, but it was in all likelihood Paul’s last Twins game of the season. Anyway, it was good to get to meet both of them in my first “new” game at Target Field.