Before I started going to games at Target Field at the end of the 2012 season, Nationals Park definitely felt like the closest thing I had to a “home” ballpark. So in not having been there since August 21 of last year, I was almost okay with my first game back being during rivalry week, when I knew there would be a ton of Orioles fans packing the Nationals Park seats. But now coming to the ballpark from a new location where the bus arrives only every half-hour, I made sure to give myself more than enough time to get to the gate and as a result got to the gate way before even I usually get there: 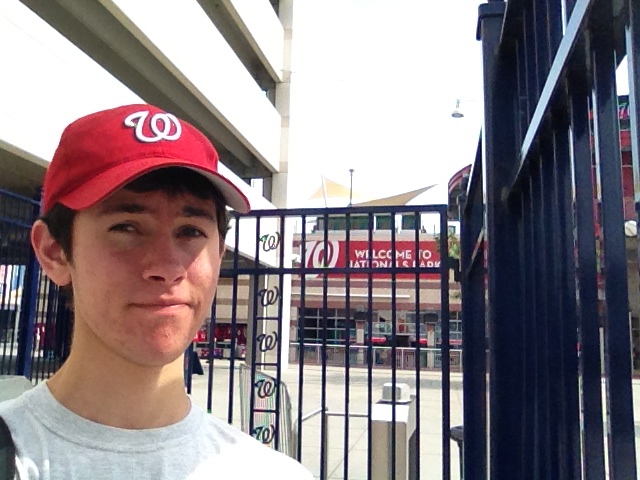 Right as I got in and headed to the left field seats, Gio Gonzalez hit a ball to my left, so I ran after the ball, caught it on the fly:

but in my deceleration, managed to trip on one of the seats and take a tumble. I felt fine, so I got up, but I first noticed that I had some scratches on my legs and then I felt something on my ear. I tapped my cap on my ear and this is what I saw:

I then felt my ear with my hand and even more blood was coming out. I wasn’t the only one who noticed it either. An usher saw my ear bleeding, and so he got another employee to take me up to first-aid, which literally opened just as we got there. I think it’s probably the fastest after the gates have opened that they have ever had to serve a person. Of course they took their time with cleaning up my ear, but all I could think of was all of the opportunities I was missing for snagging baseballs. All I wanted to do was get the blood off, maybe get a band-aid if it was necessary, and get back out into the stands. It was almost a joke to me how seriously they were taking this. I remember that right after examining my ear, the first-aid worker said, “It doesn’t look bad enough for you to need stitches; I think you can stay for the game.” I thought of replying with a super-sarcastic “Wow, thank you. I thought I was going to die any minute now because I cut my ear.” I was just that frustrated because getting on the board early was being completely wasted by the fact that I was being held up forever in first-aid. After they cleaned up my ear and let me go, one of the workers said, “Okay, now no more chasing baseballs.” Again a sarcastic “Okay. Maybe for the ten seconds it takes me to get back into the outfield seats.” popped into my head, but I realized that this was my first game back here at a place I would be the whole summer, and it’s beneficial to me to try to make as many friends and as few enemies in the ballpark as possible.

My second ball of the day came in the Red Seats in center field when I politely asked Craig Stammen if he could toss me a ball:

That would be my last ball of Nationals BP. I didn’t really flub anything, but the excess crowd that was here for this game just went to all of the spots that I would have normally played the Nationals hitters at, so I was forced to pretty much camp out in the Red Seats where there didn’t end up being that much action.

When the Orioles began their batting practice, I headed down the third base line to try to get a ball from the position players and pitchers warming up, and managed to get a ball from who I figured out several days later with the help of Avi Miller was Troy Patton: 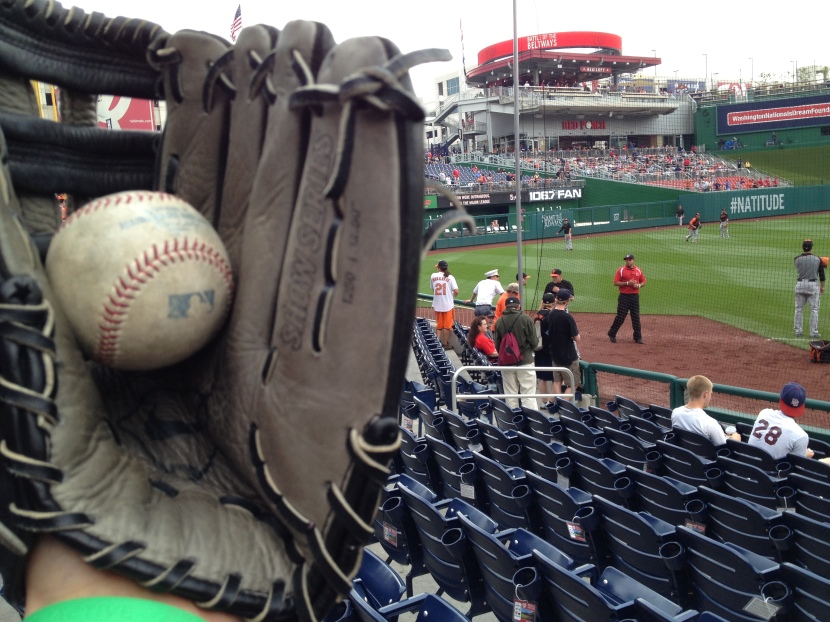 I then headed off to left field, where I’d have to say my main challenge wasn’t necessarily the volume of people, but the amount of people wearing bright orange t-shirts: 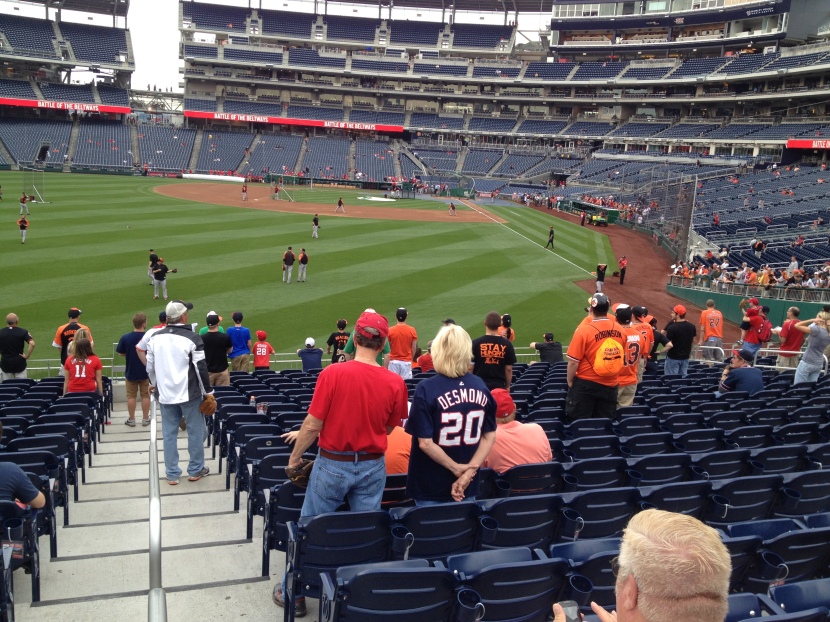 See I have a black Orioles shirt, so I don’t really stand out. It’s only when I’m the sole Orioles fan talking to a player that it really helps me. Given this, I headed over to right field, where there weren’t quite as many Orioles fans. And it ended up paying off when Jason Hammel tossed me a ball that I almost immediately gave away to a kid next to me with a glove: 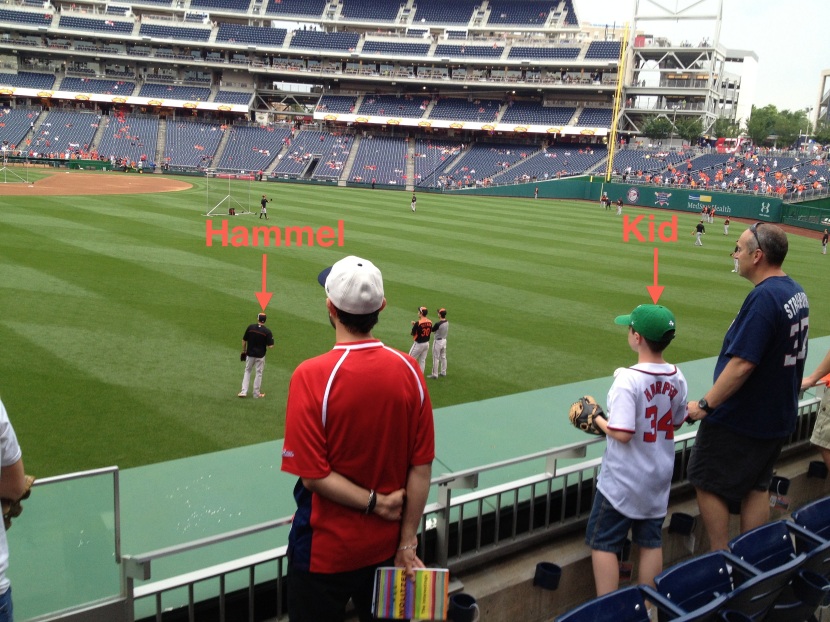 Then at about 6:20, I realized batting practice was going to be wrapping up, so I headed to the Orioles dugout to try and get a ball when the Orioles were packing up their baseballs. When I got there, there was only one problem: there were too many people down there by the dugout with their Orioles gear on (It became my goal half-way through that sentence to see how many “there”s I could pack into one sentence), but the rain that had been holding off all batting practice couldn’t have come at a more perfect time. It started pouring just as the Orioles were finishing, and thus driving all the people who had been lining the dugout away, leaving me practically the only one in Orioles gear: 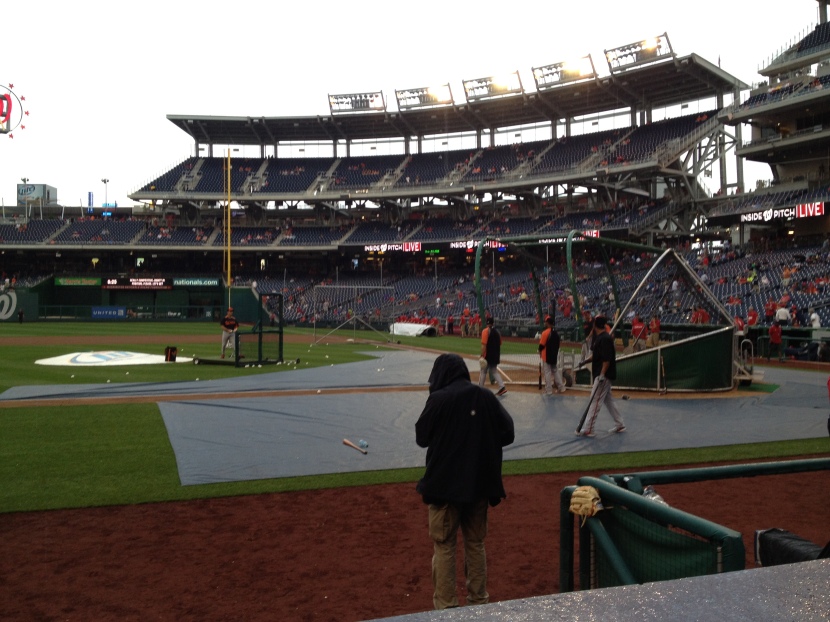 And as a result of this, when the Orioles cleared the field, I was the only one who recognized Rudy Arias, so when I said his name, he almost looked shocked that someone recognized him, and tossed me the ball that he had in his glove for my fifth of the day:

A semi-long rain delay followed this, so I took advantage and sat in this seat at the beginning of the game:

But I didn’t stay there long as I soon joined my mom and a coworker of hers that had made it out to the game–since both of our phones were dead–effectively capping my ball total at five baseballs for the night.