After over a week off from games and simply doing other cool stuff, it was back to Nationals Park where I met up with some familiar faces: 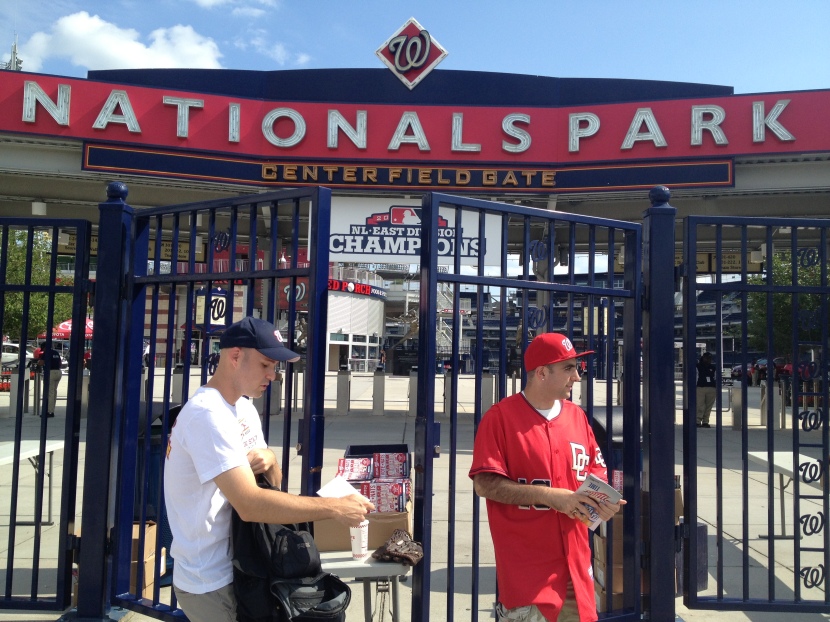 Those would be my friends–left to right–Zack Hample and Ben Weil. They drove in from New York pretty much to get a shot at the Rockies baseballs. Well at least Ben did. Zack was almost guaranteed to get a Rockies ball, but he also needed to knock out Nationals Park as he is going to all 30 stadiums as a part of some year-long craziness that BIGS Sunflower Seeds is putting him on.

When it came time for the gates to open, we all rushed inside just to be disappointed:

What I deduced was that the Nationals had an eleven-inning game in Philadelphia the night prior combined with a bus trip back, so they got back to Washington pretty late and Davey Johnson who is notorious for listening to what the players want to do decided not to take batting practice. So Ben and I just hung out in the left field seats. I don’t know what he was potentially waiting for in this next picture, but we sat down after that:

And then talked for 45 minutes or so while we sat and watched more nothingness: 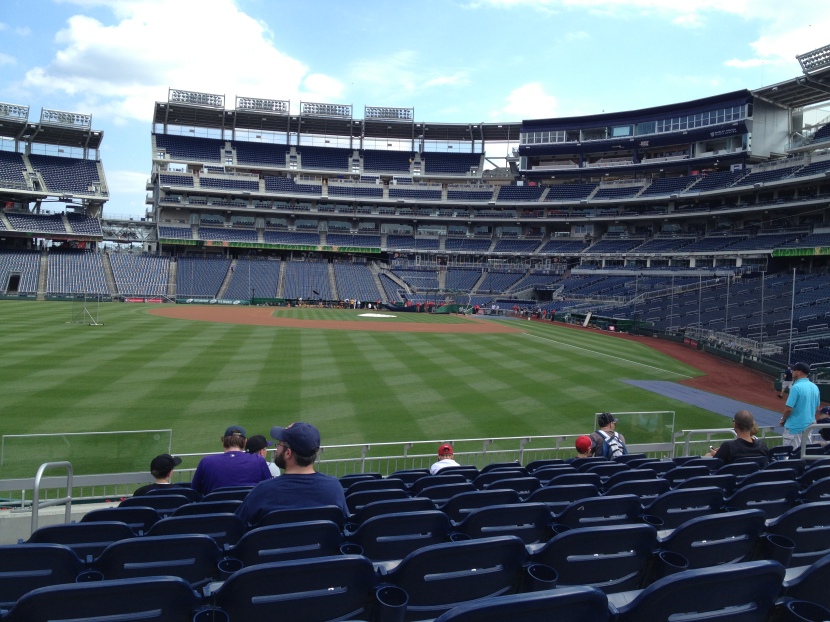 The first action we saw was pretty much an hour after the gates opened when the Rockies simultaneously started hitting and warming up. I could have stayed in the outfield to try to snag a couple home run balls, but I headed here instead: 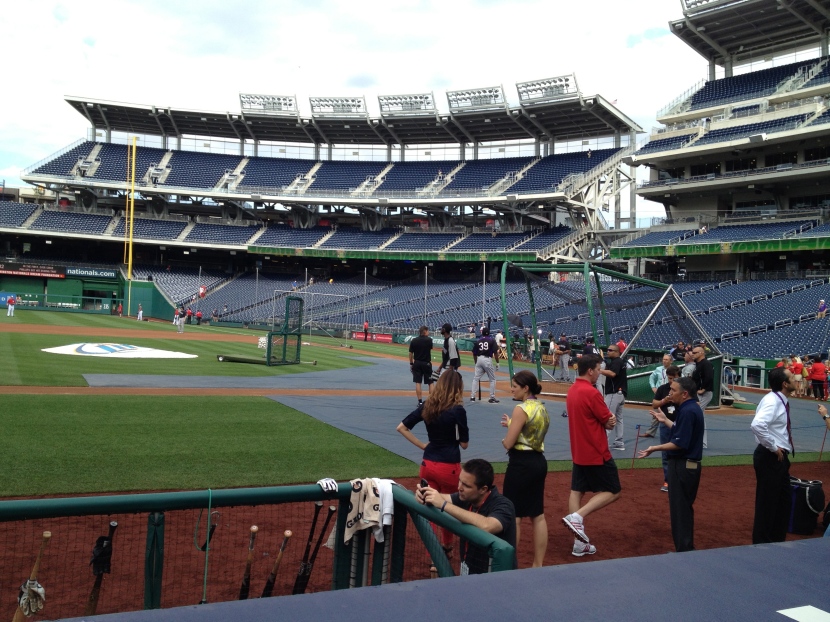 That’s because some players and coaches (Yorvit Torrealba being the only one in-frame for this picture) were tossing baseballs around at the dugout, but all of them tossed their baseballs into the infield when they were done with them. It was frustrating to me because I figured they would be done before the infielders and outfielders were done warming up in shallow left field, but they actually took longer. And I know this cost me a ball because when he and his throwing partner were done, Jordan Pacheco turned looking for a person to throw his warm-up ball to but then ran into the outfield when he didn’t see anyone. Had I been over there in Nationals gear I probably would have gotten the ball, much less being decked out in purple as I was.

I then headed further down the line where I got Jhoulys (that’s probably wrong) Chacin to toss me a ball. Unfortunately, Chacin tossed it over my head where the ball then deflected at a 90-degree angle. So while I was looking for the ball in the rows below where it had hit, an old man picked the ball up and offered it to me. I told him to keep it, but he insisted I take it. So while I didn’t count it, I walked over to the outfield and gave it to a kid with a glove on my way.

My first actual countable ball came when Nolan Arenado hit a ball to my right in the Red Seats. I ran over, initially thinking the ball was going into the left field bullpen, and caught the ball as a man in a blue shirt–who was tracking the ball the whole time and whose reflection you can kind of see in the next picture–ran into me: 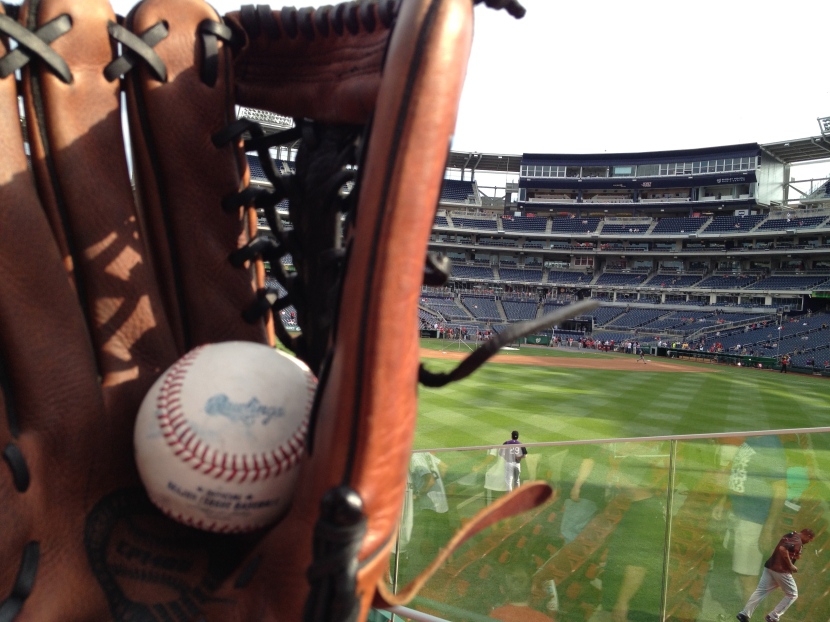 It wasn’t with bad intentions that he ran into me, but to use a basketball analogy since this game was the same day as Game 7 of the NBA Finals, it was an “and-one” situation. He was actually also involved in my next snag. Carlos Gonzalez hit a ball opposite field in that same group, and while it isn’t my custom to reach in front of anyone if I’m not in a row in front of them, this same guy was camped under the ball with no glove, so I went right behind him in case he couldn’t handle the ball on the fly. Surprise alert: He couldn’t. The ball bounced through his hands, hit the seat in front of me, and flew up in the air, where I snatched it up. I then handed it to a kid to my left.

A couple minutes later though, something that has never happened to me ever happened. The kid came back to me and asked me to sign the ball for him:

It was cool and embarrassing at the same time because I have awful handwriting to begin with, so adding in the curvature of the ball made the signature all the more horrendous. Please don’t enlarge the image to see. (And of course now that I said it, about 50 of you are going to click on the picture and enlarge it.)

My next ball was tossed up to me by this guy:

I initially had no clue who he was, but upon retrospection, I’m pretty sure he is the Rockies strength and conditioning coordinator, Brian Jordan. Anyway, he tried to toss me a ball initially by hitting this advertisement thing:

and then having the ball roll down the hill in center field. It may sound ridiculous, but look how close he got: 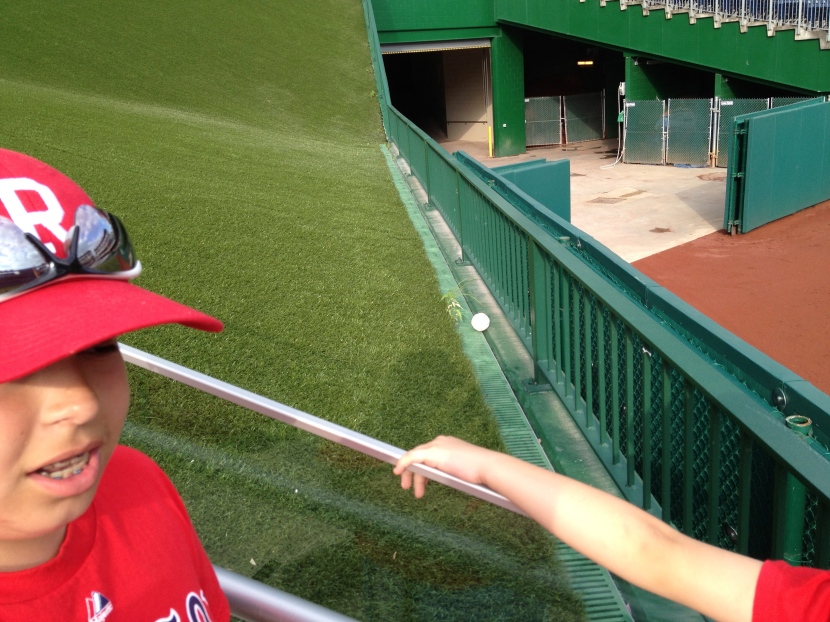 He then just tossed the next ball he got up to me normally after saying, “I’ll get you a baseball; don’t worry.” So that was nice of him. I then focused my attention on getting a Rockies 20th year commemorative baseball, but it actually cost me a ball as I called out to Jim Wright–who was in the bullpen by one of said baseballs, so I gave up on that pretty quickly. (The way it cost me was I was over by the bullpen and a ball was hit right to where I had been standing beforehand.) But regardless, my next ball wouldn’t come until almost after batting practice was over. Right at the end of batting practice, the Rockies catching coach–a.k.a. the “we have a pretty good hitting catcher prospect but he can’t field at all, so we need a coach just for him” coach–Jerry Weinstein came into the bullpen, so I asked him if he could toss me one of the baseballs that was down there. By the time I had got to him he had already tossed the commemorative up, but he tossed me a regular ball up:

And that was it for the game. I headed to the dugout at the end of batting practice and met up with Zack and Ben there where we found out about a very special food offer at Nationals Park. I then headed out to left field with Ben while Zack went to the dugout for the game itself, where this picture pretty much sums up our first sour innings out in left field:

If it sounds like I’m being uncharacteristically vague, that’s because I am…purposefully. And that’s due to the fact that I included all of these details in my latest vlog, so check that out if you want to fill in the gaps. I actually didn’t include all three of us playing catch before the gates opened, which I should have, but this is something that is going to start happening here. If I cover stuff that happened during or surrounding any given game in the vlog, I won’t write about it here because that just seems redundant. I won’t announce when vlogs come out on here, but if you so desire, you can subscribe to my channel by clicking here or you can follow me on Twitter by clicking over in the sidebar over there —-> to get an update every time I upload a video. Here was the view for Ben and I for pretty much the whole nine innings of the game: 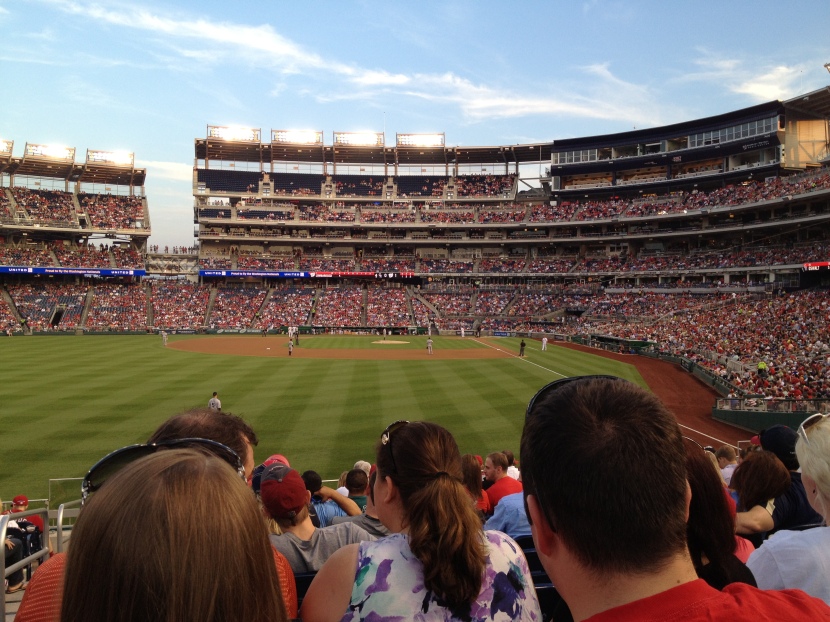 But anyway, both Ben and I tried to get a ball from the bullpen people after the game. He did; I didn’t. So he ended with 5 baseballs along with Zack, who had actually been trailing both of us as BP ended with 3 baseballs, but since he started the game out at the dugout, he snagged two third-out balls and lead both of us until Ben got the ball right at the end of the game.

And that was it. I chatted with Ben for a couple of minutes after the game, but then headed out with my step-dad, who had joined Ben and I in the bleachers at the seventh inning stretch. He had been in the stadium the whole game, but because I didn’t know where I would be sitting before I got to the game and both of our cellphones were getting horrible service, it wasn’t until then that we could know where the other was.