First game at what they call the Trop:

No there is no typo in the title. I did not go to the game the day before because my step-brother’s USF tour among other things caused  me to miss what would have been all but 20 minutes of batting practice.

I knew this game was going to be chock full o’ Cardinals fans as I saw this on my plane in:

Yes that is a Cardinal head. A visor with plumage on top. He was one of at least five Cardinals fans but the only one that could be spotted from his seat. Anyway, not good considering the Cardinals would be on the field far longer than the Rays.

But to the game…

Actually no let me first express my love of domed stadiums.

I was the first one into the stadium and it was truly magical. My NEW photographer (it was my mom this time as I fired Pipe promptly after I saw the pictures from last game) was pretty close to a heat stroke from standing out in the Tampa heat for half an hour so she  took the local route to the seats stopping at the water fountain. So, I didn’t have any pictures from this time but let me tell you that (at least for me) was great. I like domed stadiums to begin with because they are like their own little world of baseball but then to be the first fan to arrive in the seats is something surreal that I would highly recommend doing sometime. Though, I have only gone to Tropicana and the Metrodome (i have gone to miller Park but the roof was open every game) so it might just be the white roof and all the light that it reflected but for me it was great.

Okay, this time I mean it back to the game…

I was the first one to arrive in the Left Field Bleachers for a good five minutes. Within the first two I got Jeremy Hellickson to toss me a ball. Yeah, Number 100,WOO/phew!: 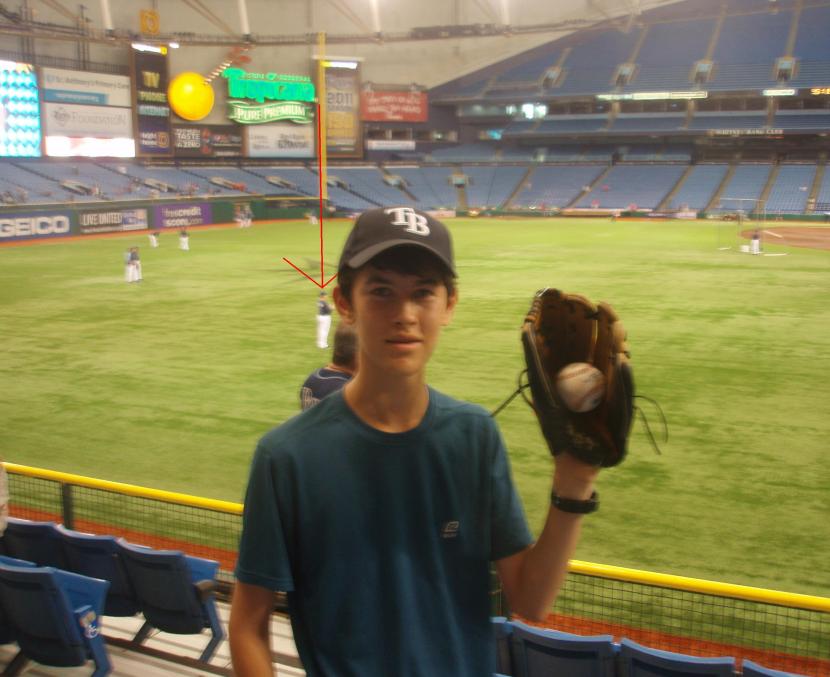 I celebrate in this way because half of batting practice at Nationals Park, I expected to get it in San Francisco after all the praise I had heard, didn’t go to any games in New York in the week between, and didn’t go to the game yesterday.

I could have just stopped there and called it a day and I would have been a clam as the stadium was filling up but it was still pretty empty at the time, there were still balls to be snagged, and the Cardinal pitchers were starting to warm-up.

Quickly after that picture was taken, I ran into the tunnel to my right went into foul ground through the concourse and emerged a Cardinals fan (no picture). I then slid behind the pitchers warming up as I was going to ask them for a ball after they finished. Turned out I didn’t need to wait as whoever Mitchell Boggs was throwing with air mailed their ball into the beach bar along the left field foul line. A security guard picked up the ball and was about to throw it back to Boggs but he had picked up a different ball. Here is the path of the ball: 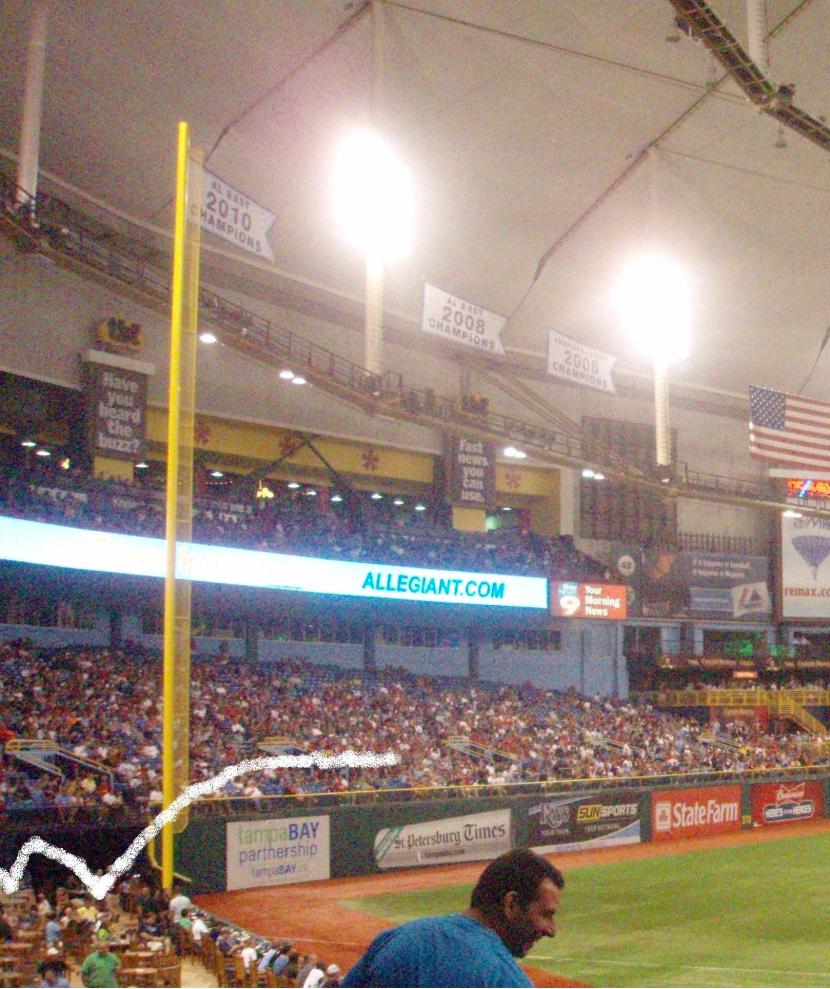 The path is the white streak. The ball actually bounced off of the foul pole a bit but the security guard was in the actual beach bar.

I then moved back further to straight away left field. Before I could make it all the way Kelly Shoppach pulled a ball pretty well down the left field line and this is not a picture of the exact tunnel but for purpose of demonstration it should do:

The arrow is the spot where I caught ball. I was walking to the right, saw the ball coming, ran to the back of the tunnel, and jumped to make the catch. Pretty simple and I got some applause for saving a couple sitting a few rows behind me that were enjoying some nachos.

As we neared the end of Rays bp several lefties were coming up, the left field seats were really crowding up. So I went over to right field. I probably should have tried to get get another ball from the Cardinals pitchers but I live with my decision because I got the Shoppach homer in the process . I didn’t get anything for the rest of Rays bp but was sooo glad I didn’t stay in left field:

That may not seem like it is that crowded but if you look carefully the tunnels that I mentioned before are actually in the seats so they impede lateral movement in rows say 3-10 ad since the first few rows are usually crowded in any stadium that means that the best way to catch a Home Run is to stay back behind the tunnels which means that you have to be on your toes in case a ball is hit into the outfield that could possibly could be a toss-up because one must maneuver the fans on either side of the tunnel to get within ear shot. In the picture above it shows that the seat were even crowded behind the tunnels making the conditions miserable.

After the Rays stopped hitting, the Cardinals took a good 5-7 minutes to get hitting. In that time, Jason Motte was throwing a ball against a wall about twenty feet and I was really tempted to ask him to play catch but didn’t because he had Mitchell Boggs right next to him. Oh well, I got him to throw me a ball a few minutes later.

As for the seats, no that crowded as this was a picture of the first three rows:

The two bona fide stars of bp were Matt Holiday and Lance Berkman. There was one round where Holiday did not hit one ball below the top of the tunnels hitting one as far as this: 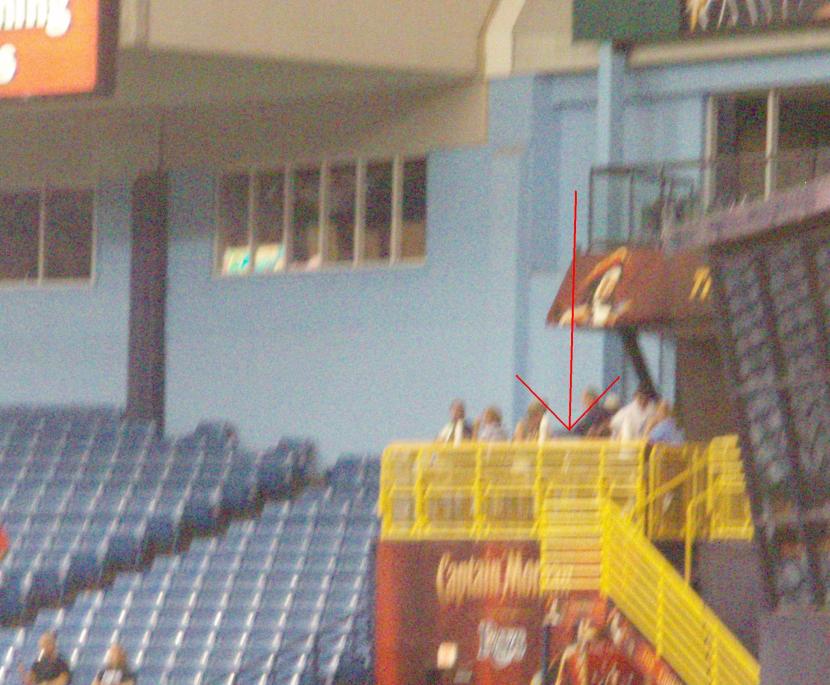 The people up there I am sure were not expecting anything to come close and as a result were taken by surprise. Thankfully no one was hurt but that ball must have gone 500 feet or close to it because although it is not dead center it is also 30+ ft above the field. I was in left field while this power show was going on but sadly didn’t get anything because of the crowded seats. Berkman, on the other hand, was a little less impressive but hit them to the less crowded right field seats.  He was routinely pulling bombs to straight away right but the on I caught was in right center right about where the red arrow is:

It might have been on the other side of the aisle but it definitely was once again a jumping catch that saved this time another couple that were in the process of finding their seats for the game. (I am not trying to get people to ballhawk but for safety reasons. I f you are going to bp actually pay attention and/or BRING A GLOVE.)

That was it for bp. I took another picture of myself with #100 with the tiny Tropicana sign in the background: 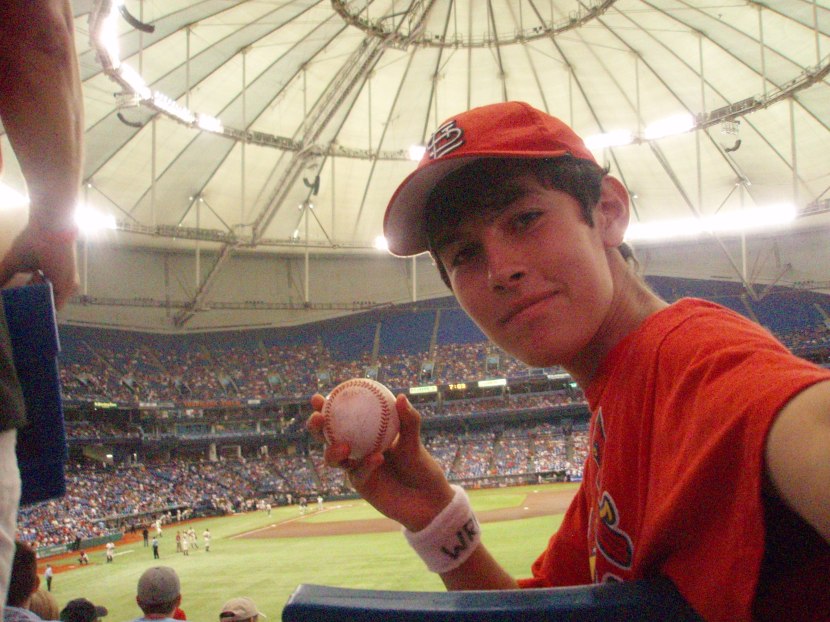 During the game, I first tried to stand in a tunnel that led to the cross aisle that spans the length of the distance between the foul poles (not in the outfield). I was then told by an usher he had to keep those tunnels clear and I had to leave. Fair enough. I left and found an unguarded section further down the line: 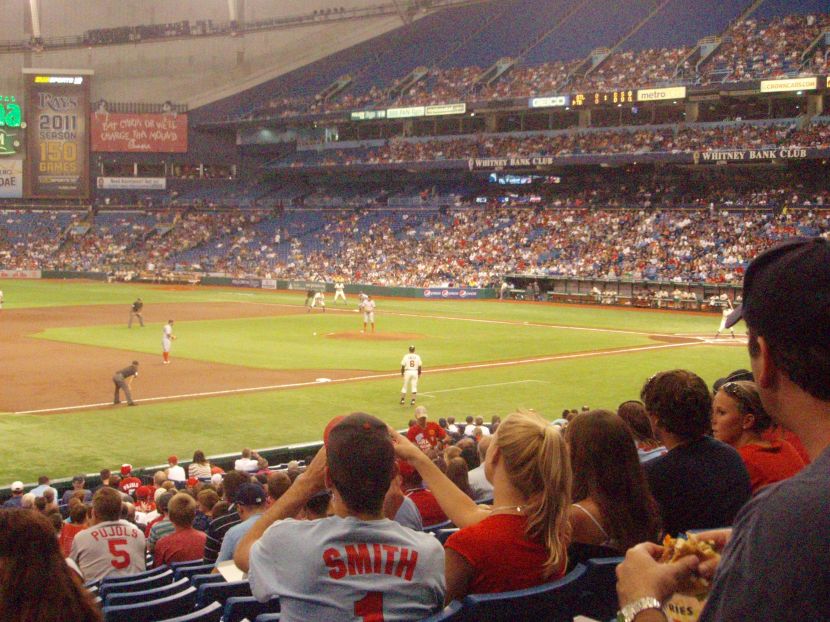 My family (see previous entry) was once again in attendance and I sat with them while moaning in disbelief at the lack of foul balls in our area despite the surplus of lefties in the line-ups. As for the 50s themed promotion: 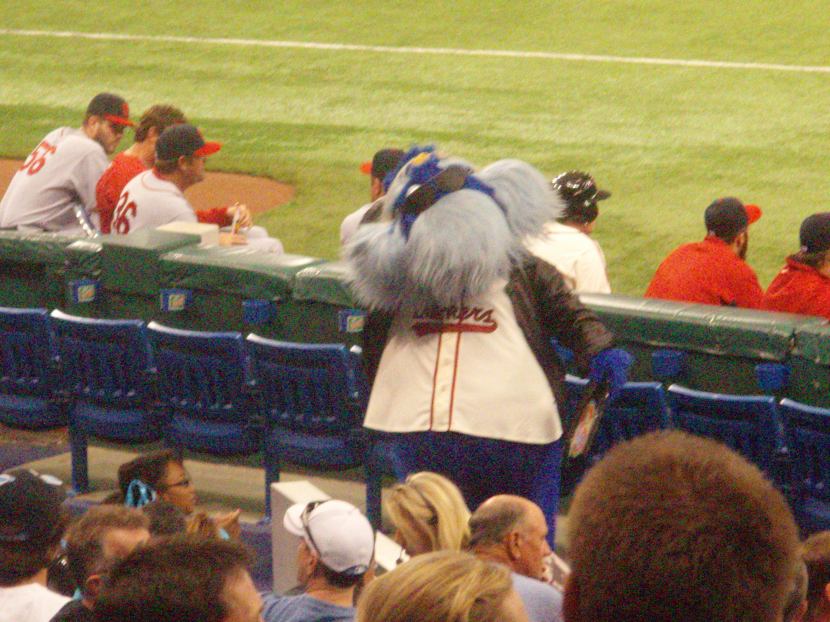 I guess it is inexpensive because the team already plays music and so all that costs money is buying the new uniforms for the team (the Rays wore the uniform of the Tampa Smokers, which were the team in the area in the 1950s), mascot, and mascot assistants but i would still say it wasn’t worth the effort because I saw maybe 10 people dressed up for the occasion and as you can tell I was all over the place.

Anyway, the Rays won 5-1 with all of their runs coming in the 6th inning as they chased Kyle McClellan out of the game but on a more historical note, Johnny Damon passed Ted Williams on the all-time hits list in the first inning at 2,655:

For those at home who have heard the legend of Ted Williams and think that number is low it is because in addition to hitting well Williams had great eyes and walked a lot. He also took five years off from baseball to join the army in WWII because he was still in his prime when he left we can safely assume he would be in the 3,500 range had he stayed.