Also, if you want to see any of the pictures I took at this day of the conference, I have uploaded them as well as the pictures from day 1 onto the Facebook page. Right now I am currently at the SABR baseball analytics conference, so I am going to get started on those entries in 3, 2, 1, now.

As those of you who read my last entry know, I’d been waiting for this day for a while. I bought my ticket in October, but I had known, and therefore wanted to go to this conference ever since Moneyball came out (whenever that may have been).

First of all, here is the video showing me taking a tour of the halls of the third floor of the convention center where this was being held:

Anyway, the day was action-packed, so let’s get to the action, why don’t we. The first panel, which was the only panel everyone attending the conference saw was the ” In the Best Interest of the Game: The Evolution of Sports Leagues” panel:

This panel included five people. Those five were:

Michael Wilbon (Moderator of the panel): 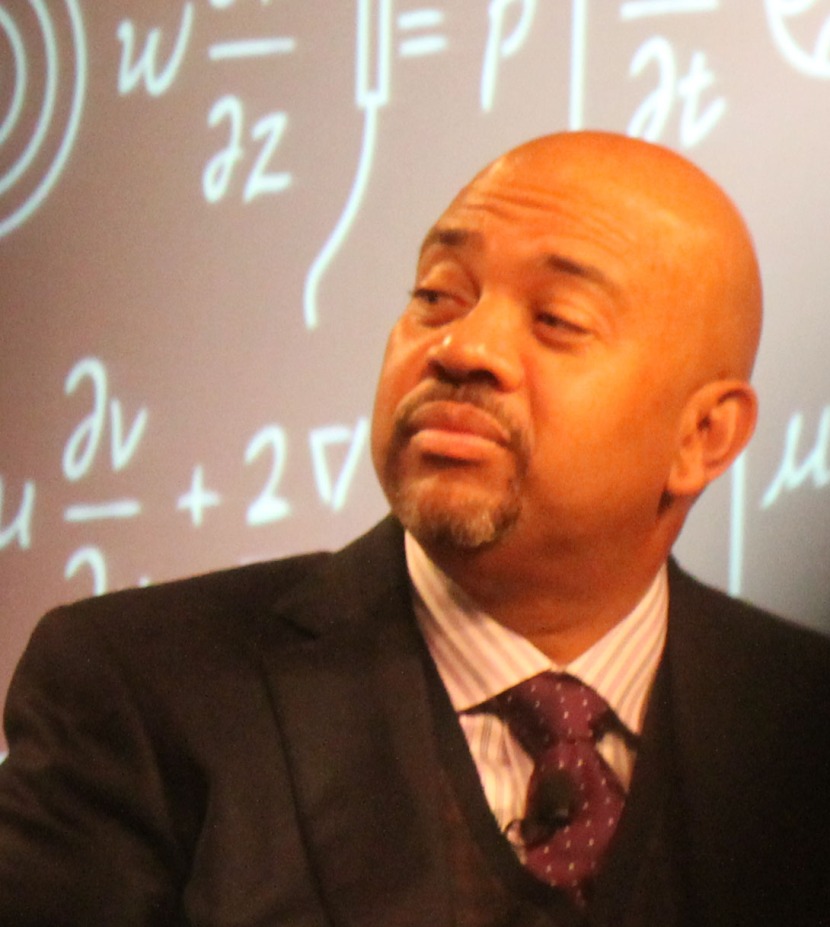 – Commentator for ESPN. Most notably a co-host of the program “Pardon The Interruption” of PTI for short.

– Commissioner of the NHL. On a side note, the first two look kind of nasty in the pictures I caught them, but I can assure you, they were nothing like that during their presentations. 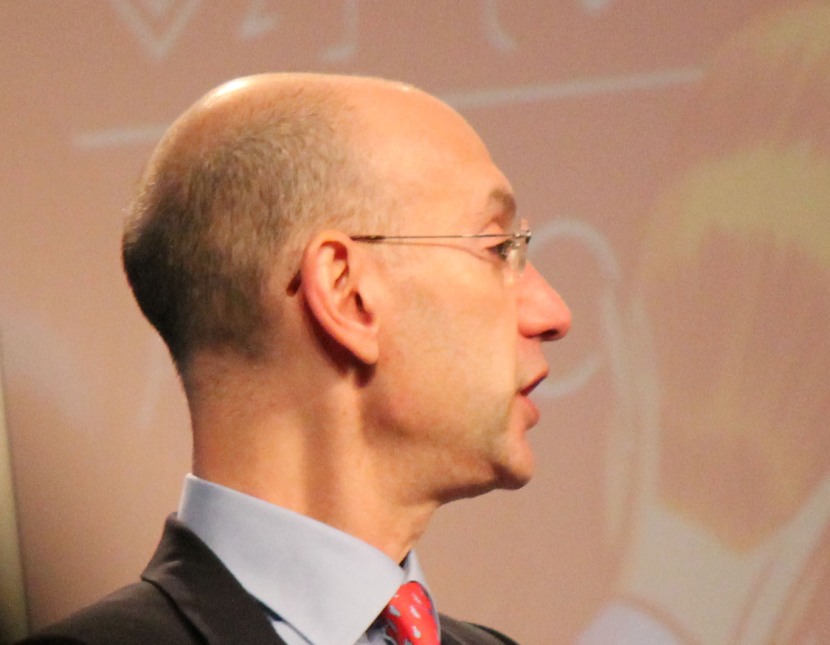 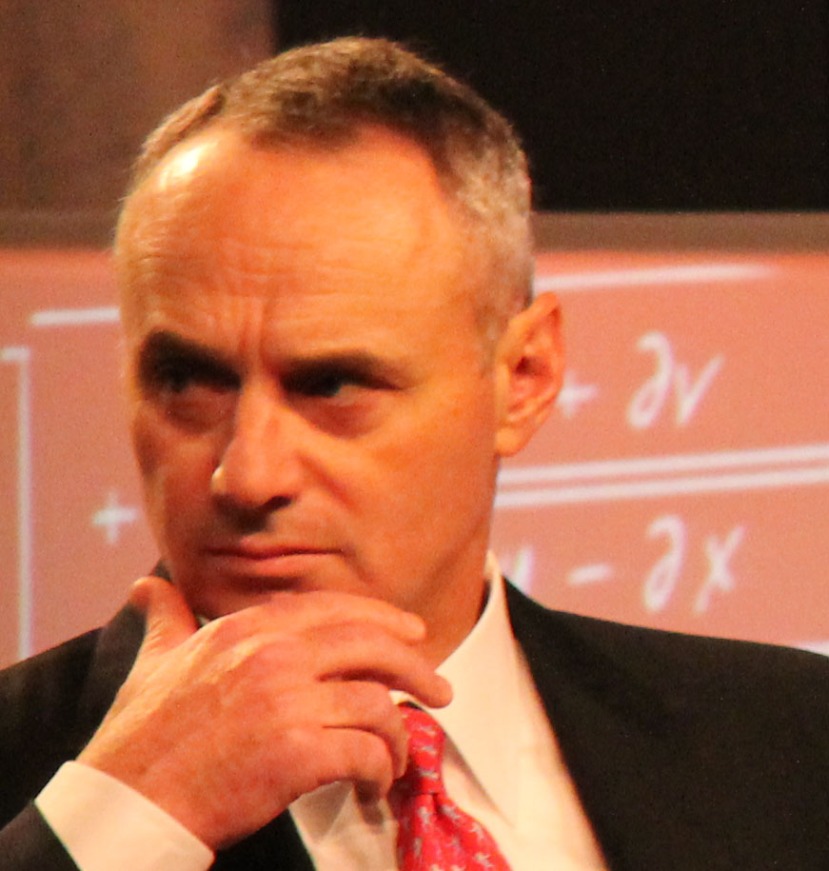 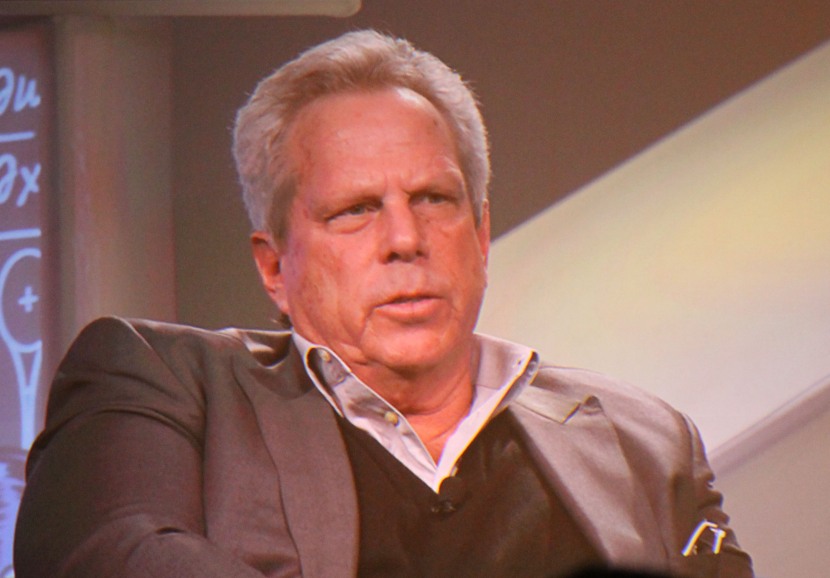 – Chairman and Executive Vice President of the New York Giants. Also I learned that he won an Oscar for his work on Forrest Gump.

– President of Boras Corporation (he’s a Baseball agent and that is his company).

I won’t bore you with all the details since this IS a *Baseball* blog and the panel wasn’t entirely Baseball comprised, but there was a discussion brought up on Labor Negotiations of MLB alone. There only Boras and Manfred talked and both made good discussion. Obviously, Boras was on the players’ side and Manfred was on the league’s side for most of the all of the labor conflicts the two have gone through, so they discussed this. There was no actually “arguing” during any of the panels i went to yesterday, but the panelists did give a better view of their side than the average fan usually gets. During this portion, Boras made an interesting point that the actual average career of a MLBer is 3 years and the players have this in mind during negotiations.

Here is a look at the panel via the video screen since I couldn’t fit all of them in one picture without a couple being blocked by some person’s head:

Here is a video of the whole panel if you so wish to watch what actually went on during it:

After the panel ended, I walked up to the stage and photographed it to give you a better idea of how it looked. Here was the result:

I also went to the back of the room to take a picture of the control booth/platform:

I then left the room to explore a little more since there is 20 minutes between sessions. The most interesting thing I found on this little venture. If you want to read the actual presentation, the picture is high enough quality to click on it and zoom in to read it, but for me to actually explain the idea behind the presentation would be too long to write out. Anyway, here is said picture: 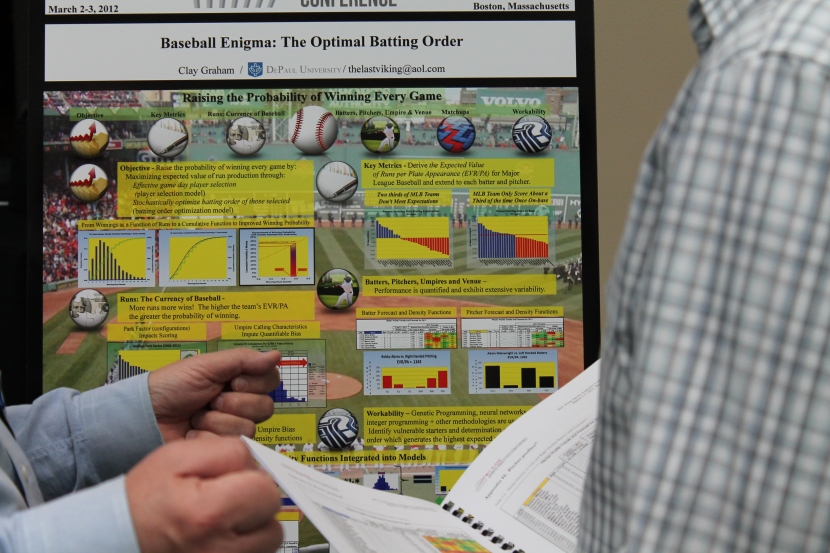 The next panel I attended was entitled, “The Business of Sports: Winning Off the Field”, which was also held in that main Ballroom. The panelists were: 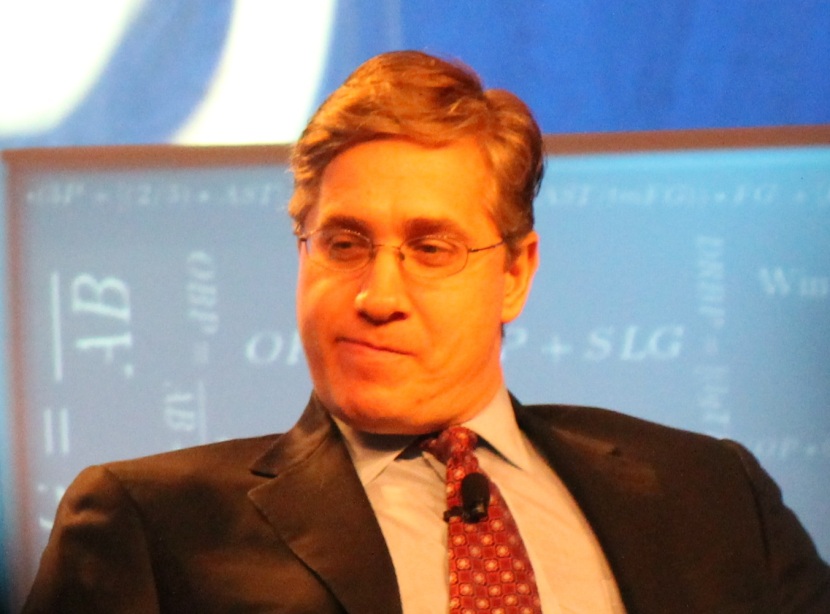 – SVP Corporate Development for the NFL. 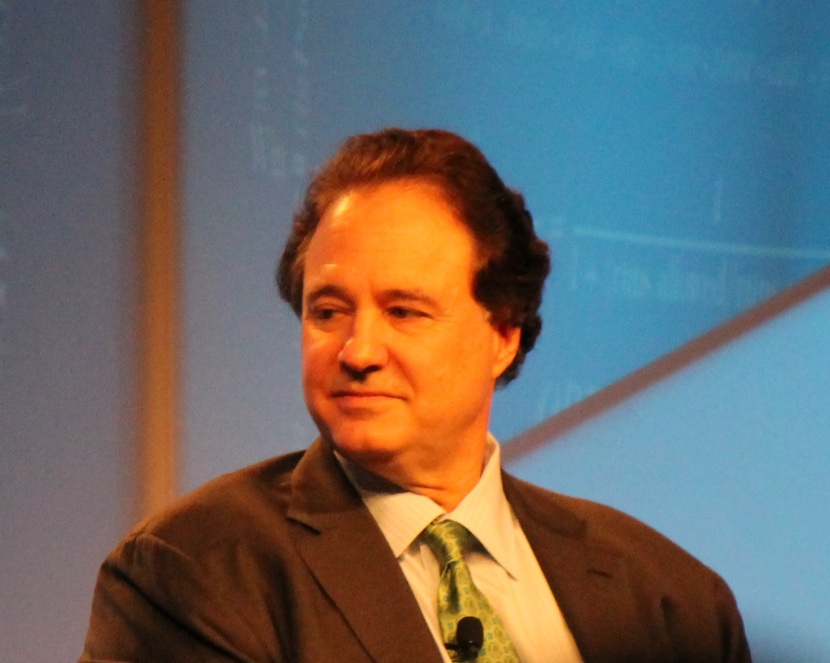 – Co-Owener of the Boston Celtics (that spelling is of whoever put together the book not my own).

– President of MSG Sports. One story for him is that during the panel, he gave a signed Jeremy Lin T-Shirt to a Houston Rocket’s personnel to thank that specific person for releasing Lin (I assume that person was the GM, but I don’t pay enough attention to the NBA to know the name). Edit: After going to the second day, I realized that it was one of the co-chairs of the conference O’neil gave the shirt to. Who was this co-chair, and what did he have to do with the Rockets? It was actually Daryl Morey, the GM himself. So this whole exchange makes much more sense now that I know this information. 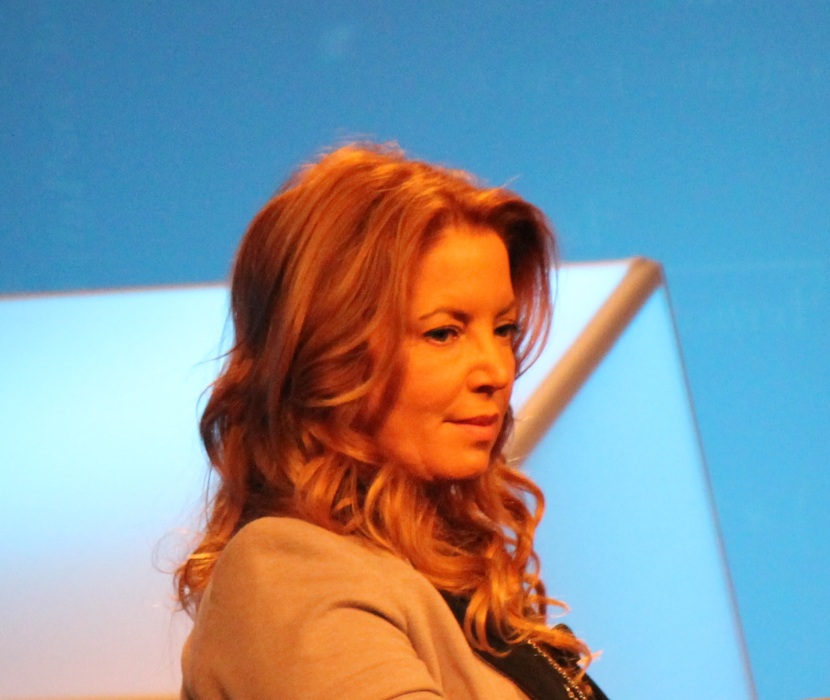 Again, I won’t go through of any of the details, because there were no MLB panelists. However, if you really want to watch it, here is the hour-long video of the panel:

If you want to see the Jeremy Lin Jersey Exchange, it can be seen starting at around the 7:00 min mark of the video.

Next I went to the Research room for a couple of PowerPoint Presentations. Let me just clarify one thing, there was no set route for a person to go. At anytime there were at least 4 different sessions going on at a time and it was your job to decide which it was that you were going to.

The first Presentation was entitled, “Big 2’s and Big 3’s: Analyzing How a Team’s Best Players Complement Each Other”. It was a Basketball Presentation, so I won’t share anything, but I will show that it was presented by this guy: 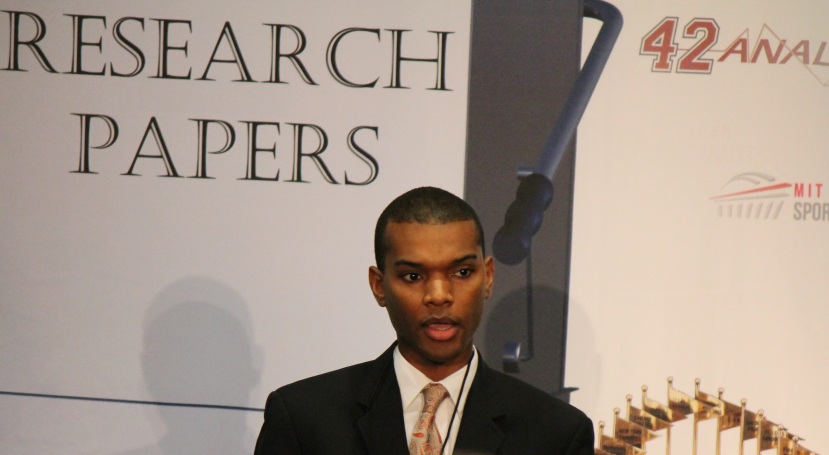 If you do, however, have an interest in this research paper and what the presentation was like, here is the video:

The next presentation was entitled, “Predicting the Next Pitch”. This was a completely Baseball study looking at whether some students at MIT could develop a method for predicting pitches. The presentation itself was done by the professor, John Guttag (I assume that’s his name as it was on the cover slide):

Since it was a Baseball Presentation, here are some of the slides:

If you want to have a look at the presentation itself, here is the video for ya:

Next was definitely one my favorite sessions of let’s see if you can guess which panel it was:

If you guessed Baseball Analytics, you are correct. Oh yeah and if you read this tweet before answering it’s cheating:

“They just claimed this is, ‘The best Baseball Analytics panel assembled’. A bold one, but looking at them, I believe it.”

Anyway, the panel itself went as follows: 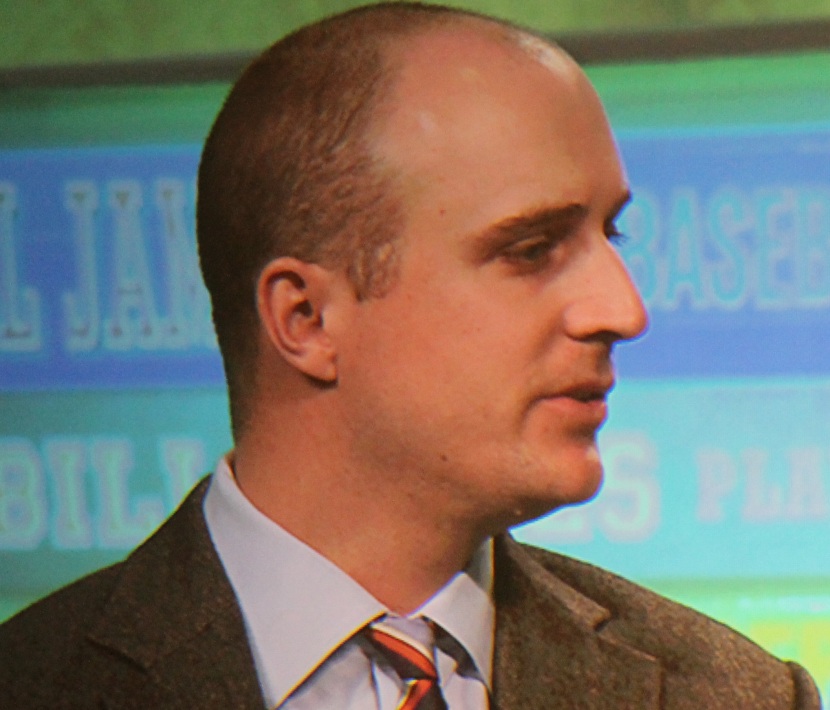 – Special Assistant in charge of Scouting and Player Development for the Tampa Bay Rays. 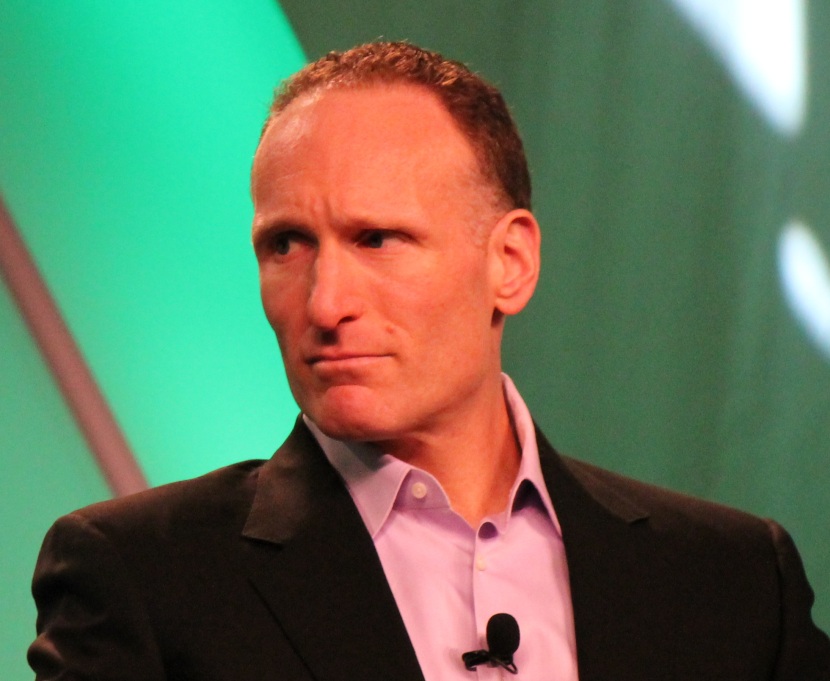 – President of the Cleveland Indians. 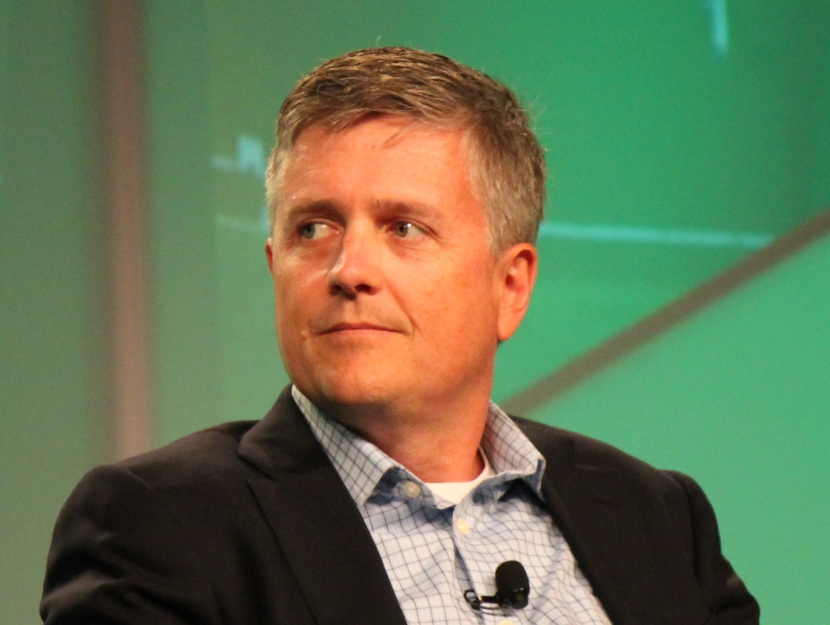 – GM of the Houston Astros. 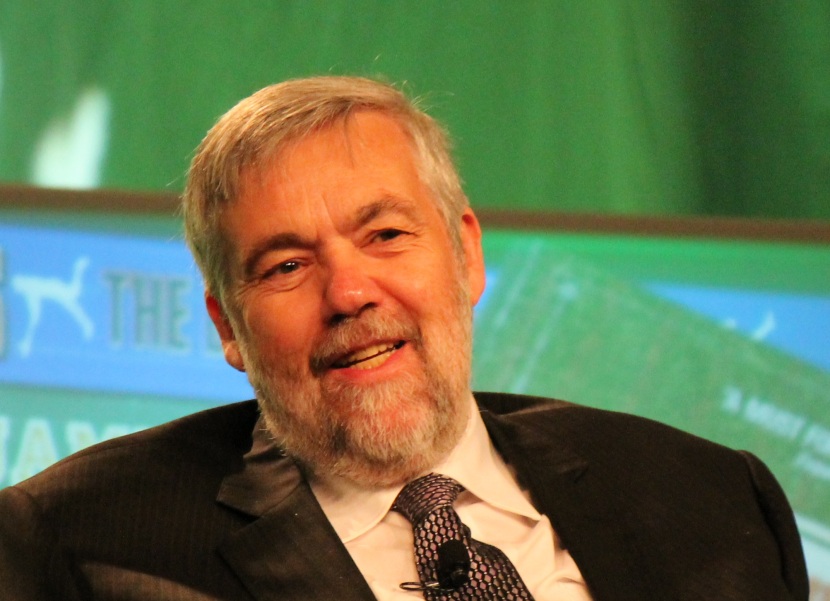 The panel discussed many things, so I will share what it is I wrote down.

If you are really interested in this topic and have an hour to spare, here is the complete video of the panel in its enitrety:

Next up was a presentation in the “Evolution of Sports Room”:

Actually I missed the best part of that banner in that particular picture, but see if you can spot it in any of the pictures from either this entry or the next one. 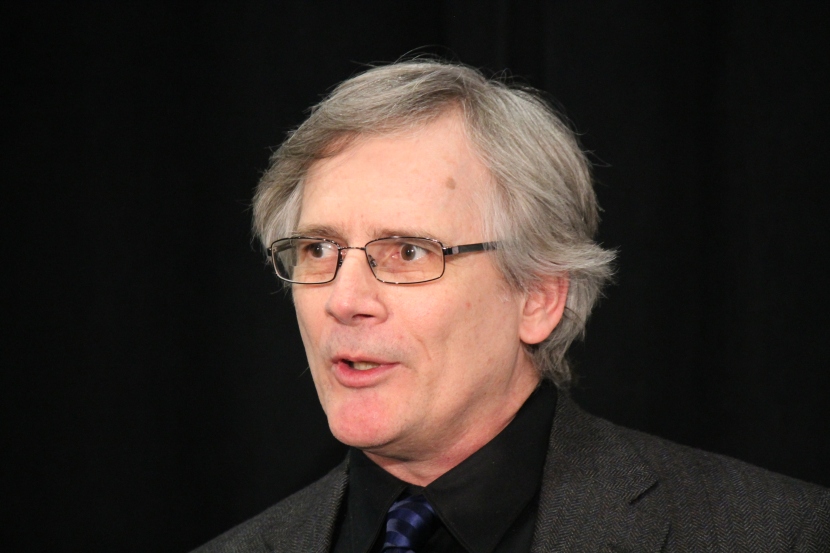 Since it was a Baseball related presentation, here are a few slides:

Basically, the idea was to train hitters to recognize the pitch based on the first .150 seconds of flight. It was a very interesting idea for me as a manager of my high school baseball team. If it is interesting to you, here is the video:

The next presentation was yet another Baseball presentation and I’ll also show the extent of what I paid attention to: 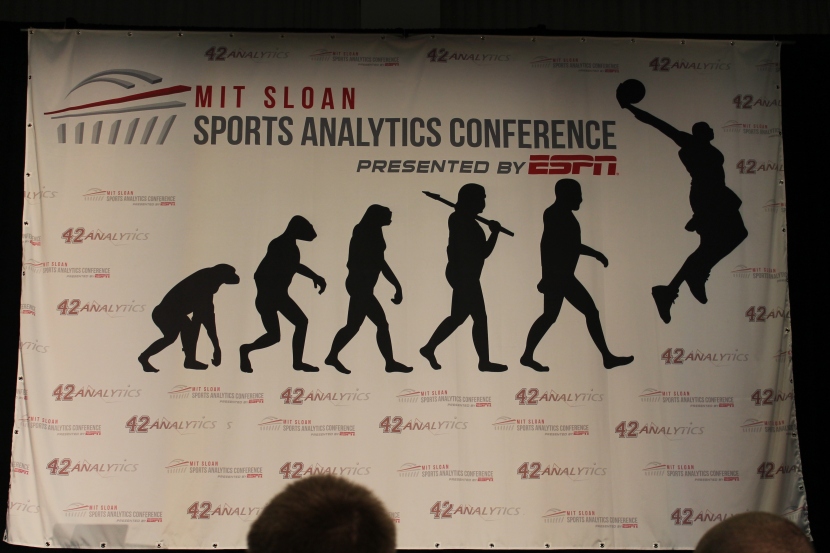 It just wasn’t THAT interesting a presentation. The slides were monotonous, both speakers were uncertain in their words, and the demo site they put together for the conference was pretty unimpressive and basic. I really wanted to leave and got to “Art and Analytics of Negotiation”, but didn’t want to be rude in such a small room so I stayed for the whole thing. A fun fact, though, the first presenter, Mike Attanasio, is both an MIT Sophmore and the son of the Brewers’ own Mark Attanasio, or so I am told. Basically, the only thing I would possibly use the site for is looking up stats if I wanted to know how a specific player performs in a certain temperature. The example they used, Carl Crawford, stunk in cold weather last year, but did well in warmer weather. Anyway, it might be interesting for you, who knows. If that is the case, here is the video for this presentation:

The next session I went to was one entitled, “Competitive Advantage: Sports Business Analytics”. I really didn’t like this one, because it was four presentations instead of a panel and I once again wished I were in the ballroom. This time the panel taking place was “Coaching Analytics”. Anyway, here are the faces of the people who presented in this session. I don’t know their names, because they’re not in the book I got since they weren’t a panel:

Next was the final session of the evening simply listed as “A Systematic Approach to Sports Negotiations”. I didn’t think it was possible, but it competed with the Baseball Analytics panel for my favorite of the day. The speaker was Ron Shapiro. TH first thing he did once he got up on stage was that he complained that his son, Mark Shapiro, and his son-in-law, Eric Mangini had already spoke (both were present for this session) and “thousands of people showed up, but now that the old man was finally up there were only a few dozen (to be fair, he did have the room filled. It was just that his room was significantly smaller than the Ballroom where both of them spoke. It is very interesting for anyone looking to get into the business side of sports. If you have any such inclination, or just want to watch this presentation, here is the video. Some of the presentation goofs are pretty entertaining:

In addition to being a baseball session, sort of (Shapiro does a bunch of things. He was/is: Cal Ripken’s and Joe Mauer’s agent among others, has worked in/for the front of the Baltimore Ravens and San Antonio Spurs, and was originally a lawyer.) It was also an amazing talk. So, I will put up every picture I have of him. I did take some video in this session and once i have it on YouTube, I will announce it via twitter that this entry has been updated, but I don’t know how long that could take since my home computer is nearing its disk limit and videos tend to take up a lot of space on that: 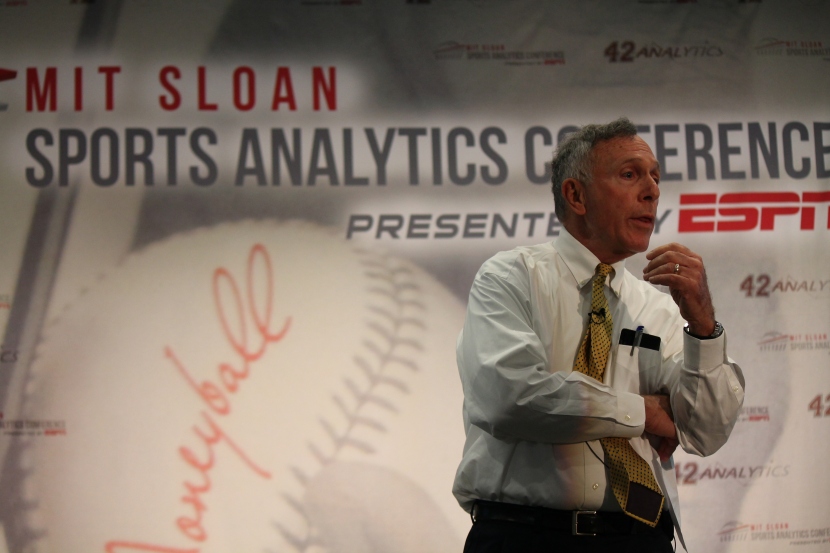 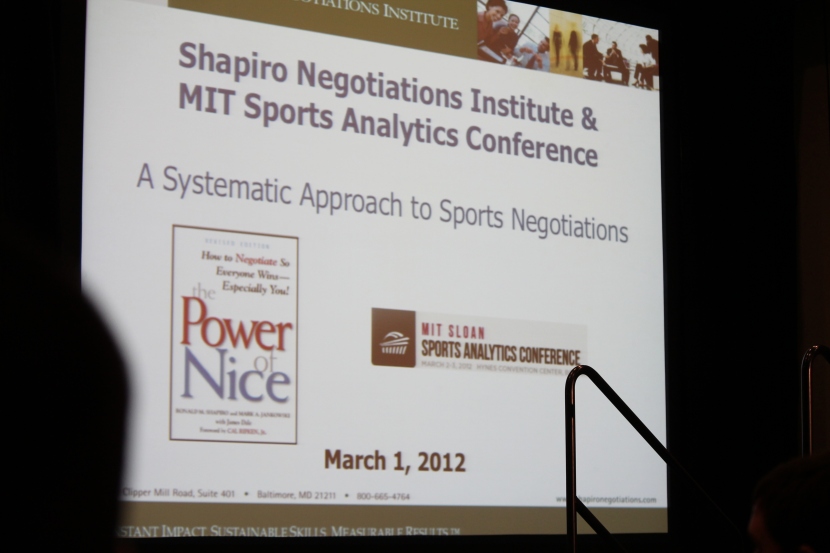 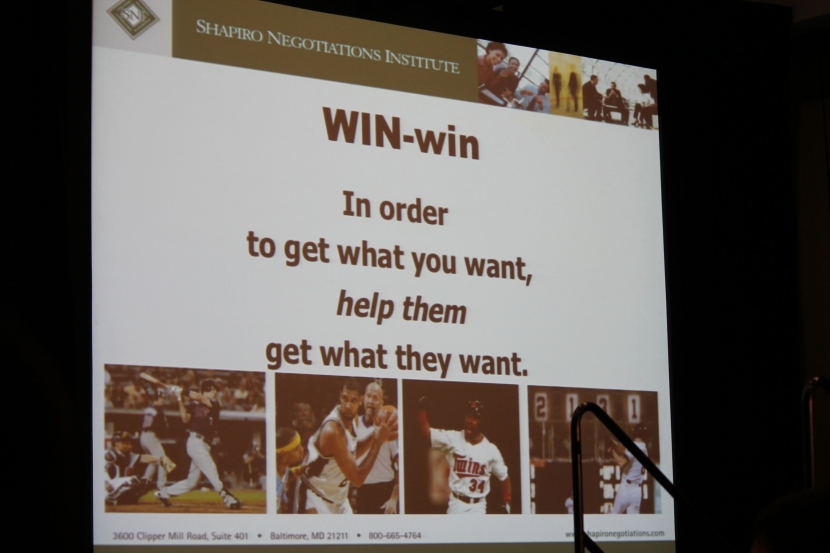 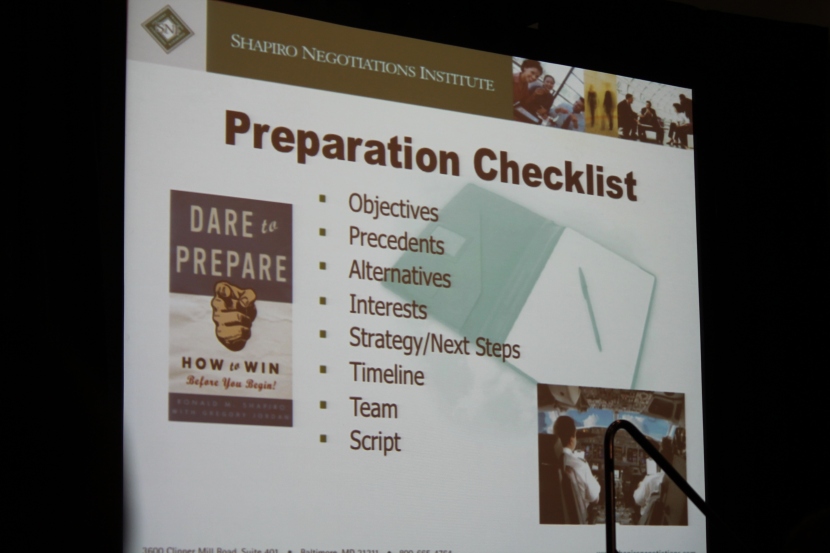 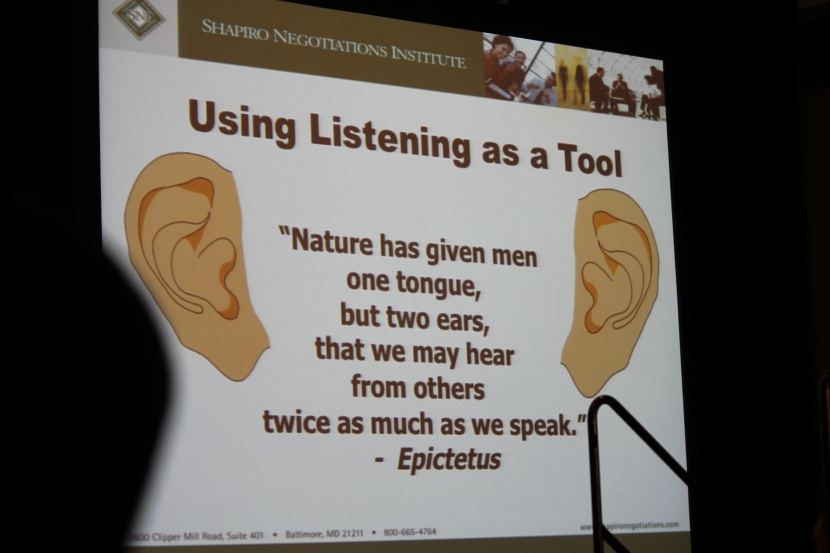 So that was my first day it was a great day and now that I’ve gone through it, I can say that the second day equaled it, so stay alert, because that entry will be published either tomorrow or Monday and then I will resume the Offseason Recap and Preview entries with the Washington Nationals, the Atlanta Braves, and some team from whichever division you select.