On a Saturday came the final day of my wonderful, baseball and number-filled experience. I still got up as early as the day before to watch the sun rise, but this time I did some schoolwork instead of heading to the earliest panel.

Thus, the first panel of the day that I attended was International Baseball Landscape. It was moderated by Rob Neyer and the panel itself consisted of:

The discussion started with the World Baseball Classic. The panel saying that the goal of the WBC was to teach America about international baseball and to spark interest in other countries. Landino added that comparatively, other countries are way more excited for the WBC than in the US.

The conversation then shifted away from the WBC and moved to player development abroad. Brooks started off with saying that MLB players will start coming from China; Landino saying that Colombia is the next baseball frontier, which I then talked to him about after the panel ended. (For those of you who don’t know, I was born in Colombia, so this was exciting for me.) Another thing that was exciting to me was what Rawtich said next which was: If you can speak Spanish, you are four steps ahead of everyone else in terms of working with a baseball team, since there are so many Latin-American facets. The panel then ended with the state of two Caribbean baseball power houses. With regards to the Dominican Republic, Landino said that a setback nowadays is that players are too old at 17 or 18 years old. Brooks then said that the main problem with Puerto Rico is that with them being included in the MLB draft, they now have to compete with hundreds of US prospects without people looking for them as feverishly as before due to the lack of scouts in PR.

From there, I headed to a presentation: Quantifying the Consistency of Pitchers. The idea being, that consistency is always something that has been regarded as a positive thing for a pitcher, but there has never really been a way of ascribing a number to it. This is all I feel like explaining about that presentation.

After which, it was time for another lunch and panel on prospect analysis and evaluation. Moderated by Barry Bloom, of MLB.com, the panel consisted of a trio of technically-MLB.com people:

Mayo and Callis started off with saying that there has been an explosion of both information and the speed at which it travels, which has led to a different evaluational process with prospects, with Callis elaborating that the most important stat to look at first in that whole process (for both hitters and pitchers) is K/BB ratio.

While there were other things in this panel, that’s all I’ll include since these entries would be 7,000 words if I transcribed even half of the panels.

Next was the panel Telling Stories in the Age of Sabermetrics. This being put on by the sports website Sports on Earth and featuring its writers as both moderator and panelists. These were (starting withe the moderator): Steve Madden, Emma Span, Mike Trainer, and Howard Megdal.

I believe it was Steve Madden who started the panel by introducing Sports on Earth by saying that it was like Grantland in terms of how people viewed the content but more like the National in terms of getting content out as quickly as possible. He said that, “smart is better than loud,” saying that you need to be accurate and engaging but not intentionally sensational.

Emma Span gave some insight in interviewing players by saying that one should not construct yes-no questions, but the more broad and open-ended one’s questions are, the duller the response, so try to create context with the question that is specific and directed.

Howard Megdal related this to numbers by saying that numbers are very helpful in doing stories and can also be so with interviews. To elaborate, you should find player-specific information so they are engaged, because players can tune out a reporter very quickly. They are craftsmen, so if you take notice of what they are doing, they’re more likely to be engaged, with Span adding: Just because you can’t measure something, doesn’t mean it doesn’t exist.

Span then capped off the panel by offering advice for writers looking to get into sports writing, specifically looking at the type of writers that might be in the audience for this particular panel. She said first that if can explore a niche, go for it but you should be able to write on a variety of topics. Target what you want to write about/see what you need to be able to write for that. She said that you should also just try and write as much as you can, but to err on the side of specificity. “I would stop before you take a job writing for a site about non-phosphorous metals.” Then giving some advice about critiquing things: Break things down into manageable chunks when voicing critiques in a way that doesn’t sound as critical. Megdal added to this idea by saying that one must approach things gingerly when whomever you are talking to is not doing well. When looking at the numbers, look not necessarily how good they are, but where there’s room for improvement.

And with that panel and Vince Gennaro leading the conference wrap-up: 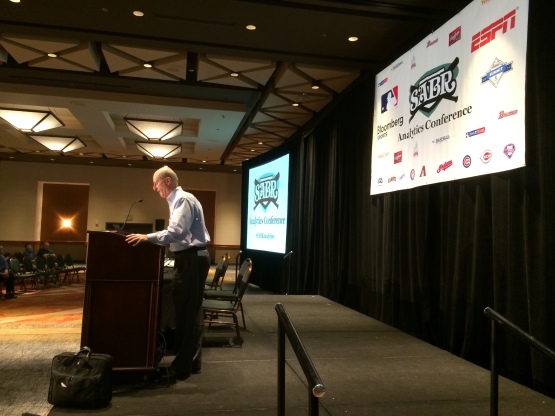 my first ever SABR Analytics Conference. The actual wrap-up ended at 4:30, so I hung around the hotel a bit talking to some of the conference organizers. Then I went to the airport via Phoenix’s Minnesota-esque lightrail line and entertained myself by taking picture like this:

And this (even though it was technically from the airport tram):

My flight wasn’t until midnight, so for the moment I just took in the pretty sunset:

And the Phoenix skyline in said sunset: 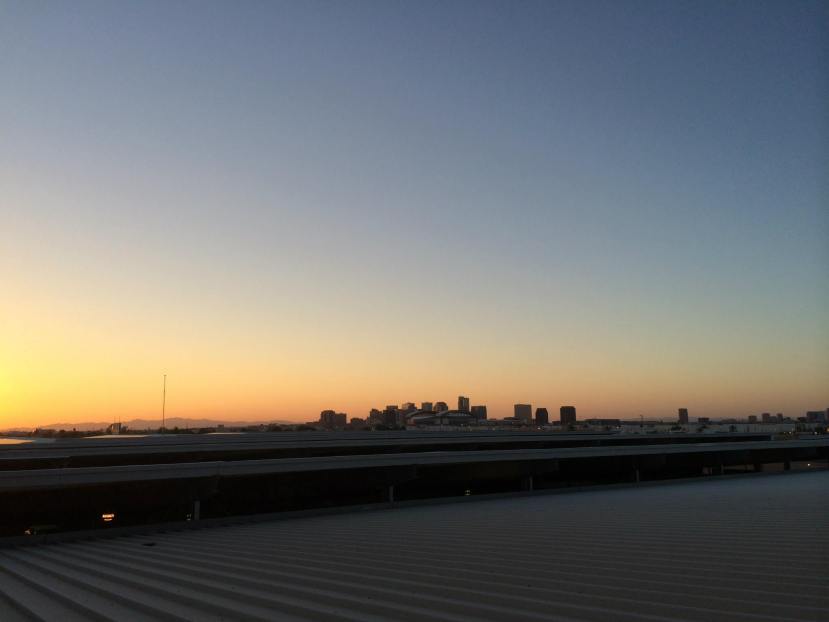 After which I waited at my gate to get on a couple of flights that via Atlanta would see me landing in Washington DC at 8:00 AM: