First game at Sun Life Stadium but there was a bit of a problem: 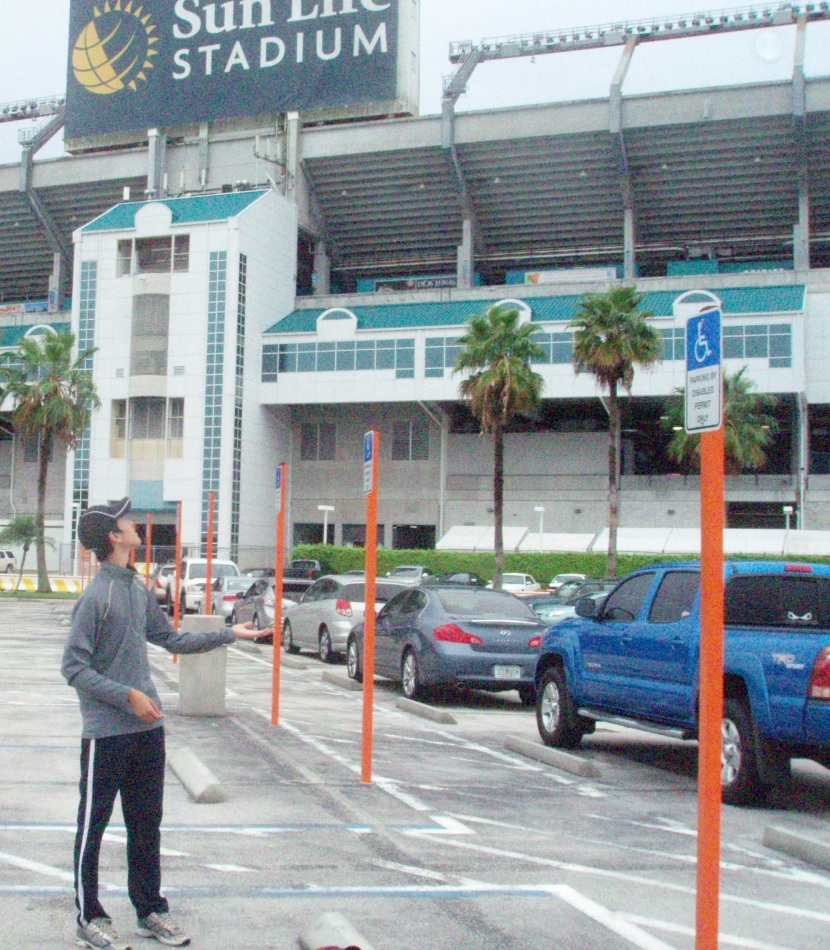 Up until 3-ish it was really raining. The picture was taken at around 4:30 but I was worried by the overcast that the rain would return. Oh and the sweats are because I had just come in from Atlanta via plane that morning and those things are freezing inside. I kept them on because the rain made it so it didn’t warm up until after the time I got in line to get into the stadium.

That said, I had heard that no backpacks were allowed inside the stadium and heard this reinforced (sort of) when the loud speakers said no bags larger than 14x14x8. A back pack in all reality is smaller than that but I still asked a guard setting up if the bag I was carrying was allowed into the stadium. He told me that it shouldn’t be but because I asked nicely, if I got in the line with his partner that I would be allowed in. So I sacrificed a few spots in line to see where the partner would set up. It felt great being in the back of a line and only seeing this in front of me:

and then to run into the seating bowl and see this: 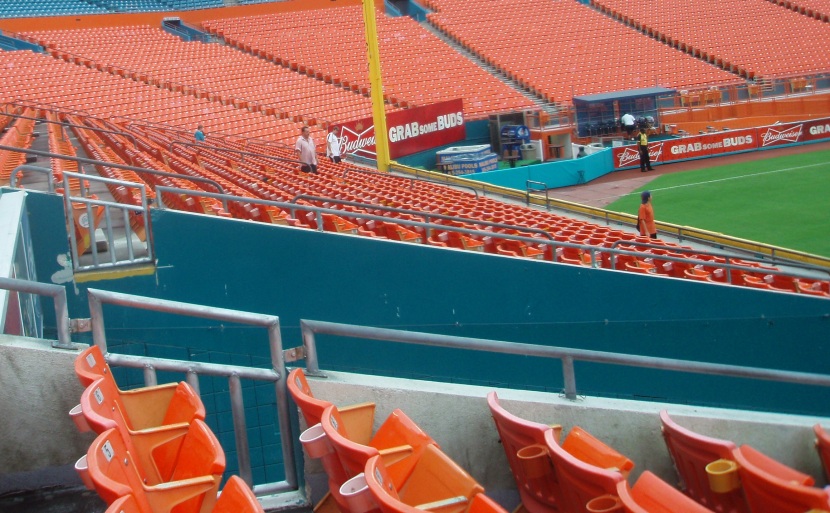 That’s right four people. Want to know what the sad part of that image is: ten minutes of batting practice had already passed. Sun Life only opens up an hour and a half early so knowing that there were two lefties pitching, I (err… my mom) splurged for the club level seats that make up left field and span the length of the stadium. This meant that I would be able to go up there for batting practice as well because people without tickets for that section can’t go in. I also left because maneuvering that giant tunnel in the middle of the seats is a pain (seen in last picture). If you thought the last picture was sad take a look at my competition:

The experience in left field turned out to be a good one for me not in the number of balls that I caught but rather learning what I was capable of. I have always regarded myself as a rather quiet person but found that I could actually get players to respond when I called out to them, even though I was thirty feet above them. The first person I got to toss a ball up was Wandy Rodriguez way in left center. I then got J.A. Happ to toss me a ball that I just barely got because he was starting that night and I guess didn’t want to injure his arm. Don’t worry folks, I was grabbing onto the railing with my non-catching hand and the fall would have only been five feet. Here I am with the two baseballs:

Sorry if I seem shiny-faced but the humidity is already high in Miami and that’s without rain on the concrete to evaporate. I then stayed between left and left center. Then Hunter Pence hit a Home Run to my right and I could literally walk to pick it up even though it was twenty feet away. I would have caught more hit balls but the Astros only real power threats were Carlos Lee and Hunter Pence and there were also seats in front of us that were swallowing more than half the Home Runs hit: 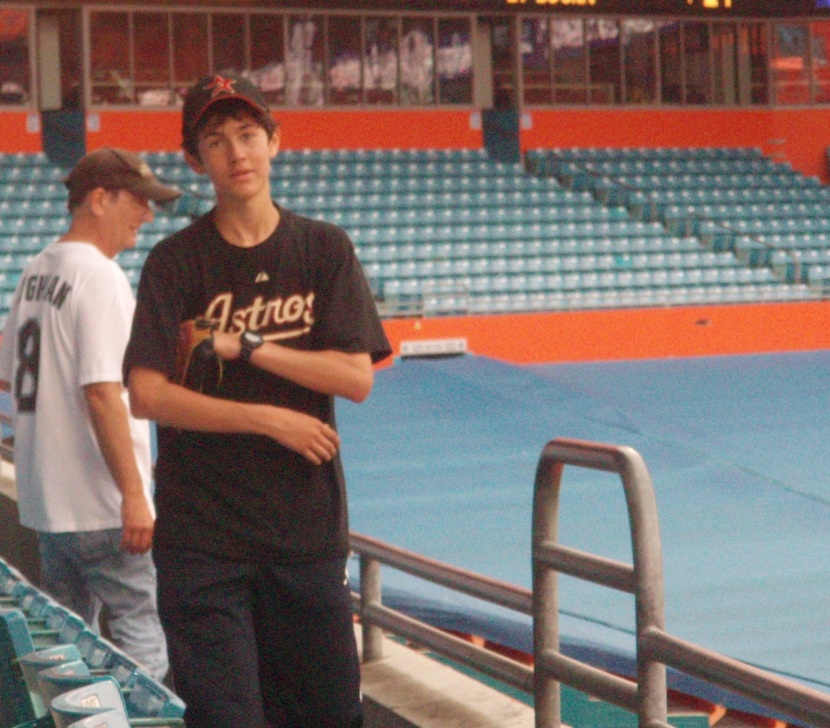 They are not the tarp-ed seats but in front of our section were seats used for football games that were folded up and thus had a twenty five foot gap with no rail or anything that make them off limits to the public. I was tempted to glove trick a few balls that were trapped in those seats (3) but decided against it because there was constantly security watching this area and I didn’t want to stir ill feelings in my first day at a new stadium. There was also a bit of an over hang from the upper deck and a few went up there but since the Marlins closed that for the rest of the season they were untouchable. Instead, I moved back over to right field when a few lefties came up.

Quickly I got a Home Run by an Astros lefty when he hit the a ball just above the tunnel I mentioned towards the beginning of the entry. I was on the right side of the tunnel so I ran up and over before anyone got it. I think Brett Wallace hit the ball but am not entirely sure. I had been pestering both Bud Norris and some other pitcher whose name I cannot recall now for a solid twenty minutes. They probably couldn’t toss that many balls into the stands as the Astros management is stricter than average in instructing players on this. I mean how else are you going to turn a profit while thirty games below .500. Yes, that is the worst in the majors. The point in digressing this much being, when the last ball of batting practice got hit into the tunnel just out of my reach, Bud Norris tossed a ball up to me without me even saying anything because I had, um, made my presence known shall we say. After bp ended, I looked around for a kid because I knew I hadn’t given a ball away my last game. The kid I think had a Marlins shirt on but I couldn’t tell because he didn’t turn around all the way. I had recently gotten my ball from Bud Norris but according to my labeling system I still have that ball, so I don’t know which ball I gave away.

I had some time to kill after bp So I took a quick tour of the club level. Behind our seats was a big food court:

Though, I should mention that the club level was clearly more geared towards football than baseball as many of the facilities were closed, including the food court. Something interesting that I learned when on a tour with the University of Miami’s summer program is that the Marlins really only rent the place out so any food profit actually goes to the Dolphins. Ready for some more football stuff. Here is there display case dedicated to the NCAA national championship that took place here  around two years ago:

Enough football. To prove the concourse goes all the way around, here is a picture of our ticketed seats from the councourse:

The sections within the dotted Orange box are the left field ones. Here is the only non blurry picture of course of the most boring hallway in the concourse: 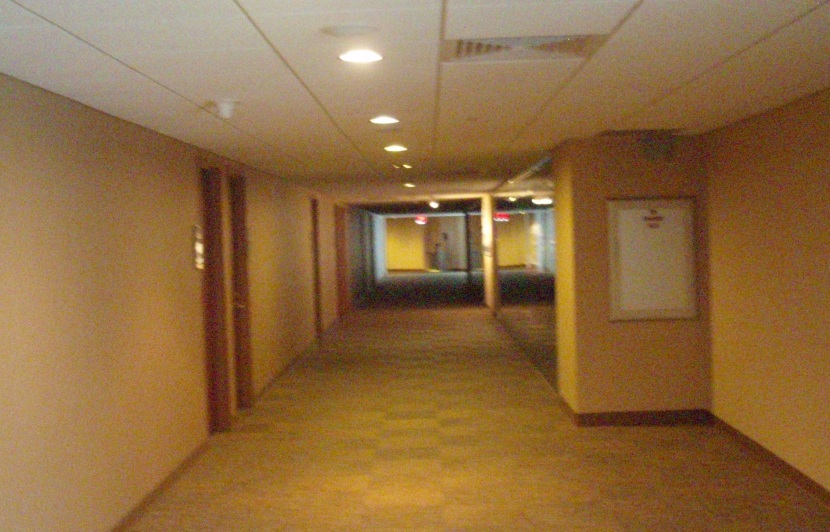 Guess what else was on this level:

I then got back to my seat in time for the national anthem. Get ready for more sad. The view to my right:

Now I know that those numbers are skewed because of the cost of the ticket but how about a look around the rest of the stadium:

I saw on various occasions people walking two sections to pick up a foul ball. I later learned that the paid attendance was 17,000 but I would say the people who should up were >5,000. I was going to move over to the upper blue seats behind the visitors (right in the picture) dugout for any extended string of lefties but there were none . I was convinced that if there was a Home Run I would have a 50-50 chance at it because I had so much potential ranging room. Then a man showed up. The two first things he said concerning me were “Oh look a real Astros fan” and “we’ve got to get you a ball”. He showed up in the second inning. No later than two minutes after he arrived, Mike Stanton hit a mammoth Home Run that according to now, ESPN’s Home Run Tracker, formerly, Hit Tracker Online, the ball went 431 feet.

Here is the link to watch it. I am the one in the black shirt that starts off a section behind the two guys about five rows apart racing each other. As you can see I was pretty far behind them when the camera loses me because I had to move up a row to avoid the railing but had the ball  been a row lower I can almost guarantee it would have been mine as I only got there half a second too late. Here is the guy that eventually got the ball:

The ball landed about two full sections away and actually bounced two rows behind him before going back into the row in front of him.

That was it no more Home Runs. I should have been on the field level. 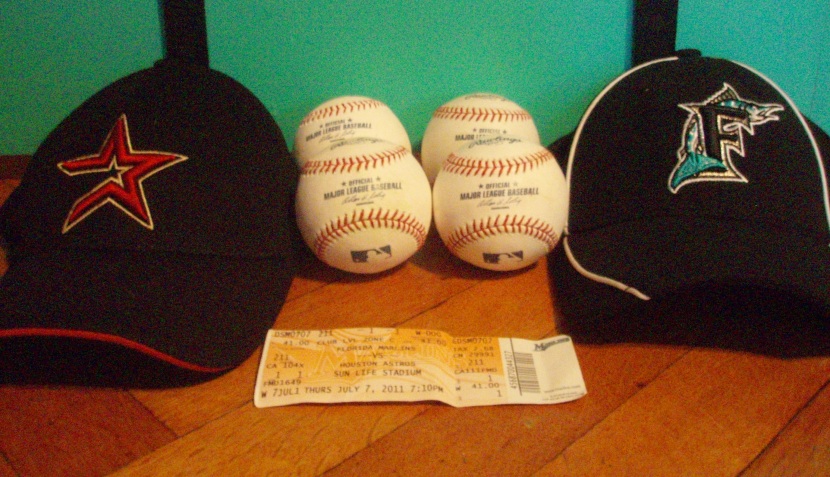