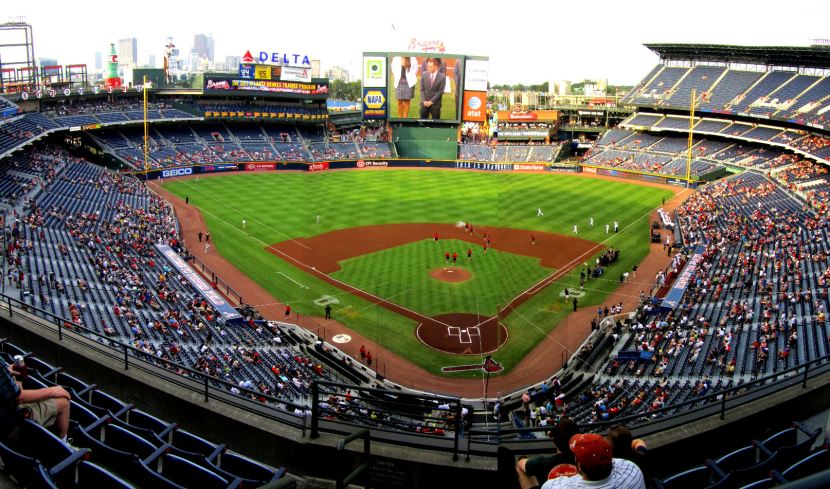 Turner Field really isn’t anything special when it comes to looks. That and it has tons of ads when you look towards the outfield. For me, ads, unless they blend classically with the stadium, are a negative. On the positive side, because it is built in the style it is, it has some oldish charm to the stadium. The scoreboard is beautiful and prominent. The reason I had it on the positive side of a C is it really doesn’t have anything that detracts from the game experience, but it has certain qualities that enhances the visual aspect of it. 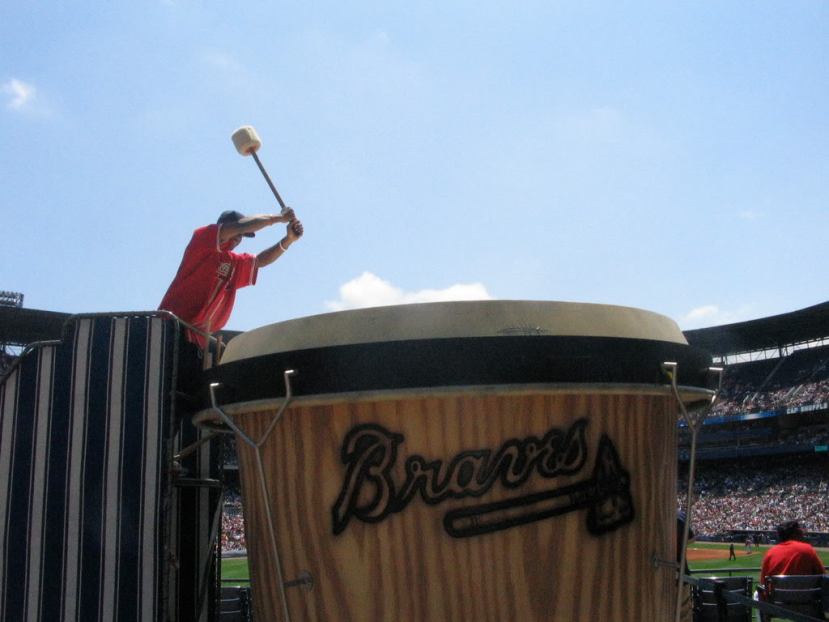 You may have heard of it and know of the rhythm of it. Heck, you may have even heard it on TV during a Braves. However, there is truly nothing like being there when they get going at Turner Field. I mean really getting into it. I was there when there really wasn’t much of a crowd, but even with my experience in those three days, I feel the moral obligation to do the chop along with the Braves fans whenever I see a game of theirs on TV. Besides this, you may or may not know this, but the Braves have the largest geographical fan base of any team in the major leagues: 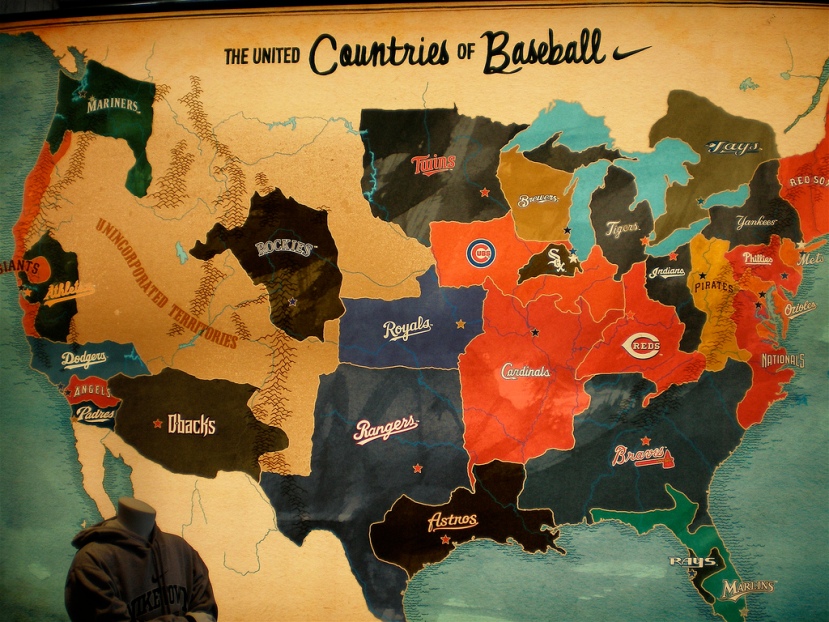 Okay, I know it looks like the Rangers do in the map, but I think they’re being very generous to the Rangers and the two Florida teams. I think the three teams surrounding the Rangers have a bit more of that territory, and the two Florida teams are still very young. While they may hold the majority of fans in the regions highlighted, everyone over the age of 45 in the region is more likely to be a Braves fan than anything else. Both the Marlins and the Rays have been around for less than 20 years. Anyway, the ultimate point I’m trying to get at is that there are a lot of people who travel to Braves fans. Therefore, the crowd is more likely to be passionate. Who do you think will be cheering louder: the fan just getting to the game as a way of relaxing after work or the person who is taking vacation days just to visit their favorite team’s stadium. I hadn’t even considered the geographical factor until I got to Turner Field and talked to people about where they were from. More so than any other stadium I have visited thus far, there were a ton of people from out of town.

First of all, I consider “Atmosphere” a contributing factor. Secondly, I couldn’t tell that well about the stadium as a whole, which is why I held off on giving this an A+, but the sample of people I encountered in my three days there were definitely nice in the aggregate. It really did feel like a southern hospitality stereotype was coming to fruition. But more than that, it was so refreshing coming from the New York City environment. For example, in New York you can for the most part tell it is the vendor’s job. In Atlanta, the beer vendors have fun with it. There are vendors that use humor in their selling in New York, but their default emotion while saying the jokes is one of emotionlessness; whereas some Atlanta vendors had the demeanor of a stand-up comedian while in the stands.

Turner Field also has a couple other things going for it in the “fan experience” sub-category. First, maybe I’m just blowing this out of proportion because of my familiarity with the Yankees and Mets, but I liked that it didn’t seem like even though they had this vast fan base that they were “too good” to cater to the paying fan. Also, even though I never entered it. Turner Field looks like possibly the best play area of the stadiums I have been to: 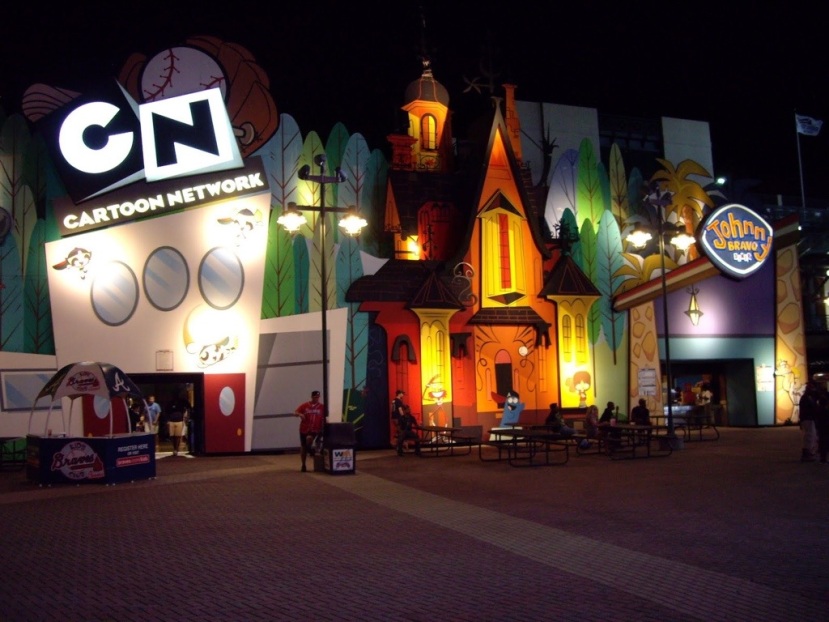 Well except for the Nick-loving kids. For the record, the reason it is a Cartoon Network themed play area, it is because the team was owned by Turner Broadcasting Systems, which is a part of Time Warner Cable, owner of Cartoon Network.

Another great thing about Turner Field’s fan experience is they have a pretty neat museum. It isn’t free on it’s own like most museums, but if you go on a tour of Turner Field (before batting practice), a ticket to the museum is included that you can use all day. If you want to check out these along with other pictures I took on the 4th of July game, here is the link to the gallery on Facebook.

This is where you see what a team is made of. In the details of the stadium.The lazy, unimaginative teams fail here and the better ones thrive. As you can see, the Braves are in the later category. If you didn’t know, my trip last year was at the beginning of July (4th of July 2011 was my first game there). Atlanta in July is not exactly the arctic tundra. Therefore the touch the Braves had with installing fans in the center field concourse/plaza that sprayed water was absolutely magnificent.

Even better, an oft overlooked feature: the seats. The Braves –although not spectacular– have (sadly) one of the better seat designs in the major leagues: 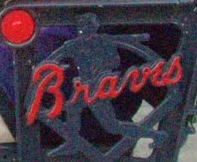 Ballhawking During Batting Practice: A+ 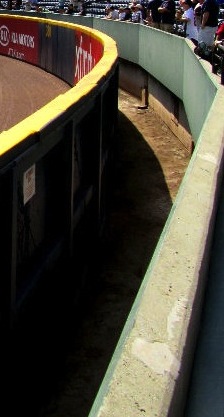 This is what we in the old country call Glove Trick Heaven. (Side Note: If you try to get a ball via Glove Trick or other retrieval devices in left field, you have to be quick on the draw, because there are probably a couple other people with a device on hand. I would factor this into the equation, but I’m only evaluating the stadium itself.)

Wow. Yet another heavenly sight. This is debatably the best outfield section in the major leagues for snagging baseballs in the major leagues. The seating goes all the way from the foul pole to the batter’s eye. And while there may be another place in the major leagues where this is the case (I can’t think of any), this is the only one where all of the individual section go across in a more or less straight line. The simplicity of it makes it absolutely gorgeous in terms of ballhawking, and the sheer amount of space in the outfield makes it amazing for snagging hit baseballs during batting practice

While center field sections usually aren’t the way to go, this is a pretty viable back-up plan. It may seem like light years away from home plate, but even though the home bullpen acts as a partition between it and the right field seats, the rightmost section in the center field seats is really right-center field when you think about it. It’s just the mentality that makes people think it is further than it actually is, but it doesn’t take a shot to reach that section, which can be a nice place to camp out if the left and right field sections of the outfield are crowded.

This is what it is: a right field section for when lefties are up. I’m not particularly in love with it, though. First of all, the home bullpen takes out a prime section and makes it so players have to pull the ball a bit more than usual to get it into these seats. Then there’s the fact that the seats don’t open until an hour after the gates do, so maybe there’s a negative association there. But finally, the gap in right field is so much smaller than the one in left and center: 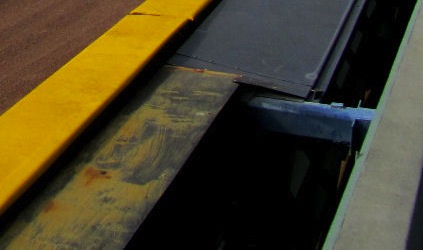 It is a maximum of three feet (probably one or two, so really the only balls that go down there are dropped baseballs by fans in the first row.

Ballhawking During the Game: A

While the outfield is a great place to be during the game if it’s not crowded, it’s not very crowd-proof if there are a bunch of people during the game, since Atlanta is 22nd in home runs in 2012. That means if you get moved back like tens rows due to fans, there is a slimer chance for a game home run. However, the place to probably be for the game is the cross-aisle behind home plate (highlighted by the green line I have included: 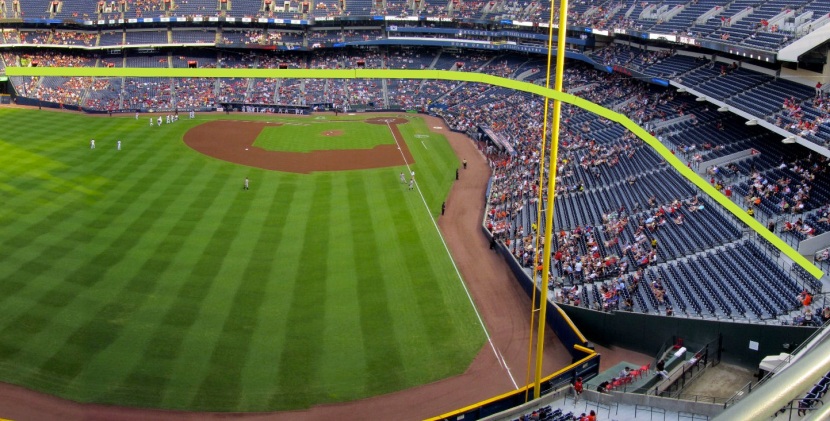 I personally didn’t stand back there, but it was because I had pretty much an entire section to myself: 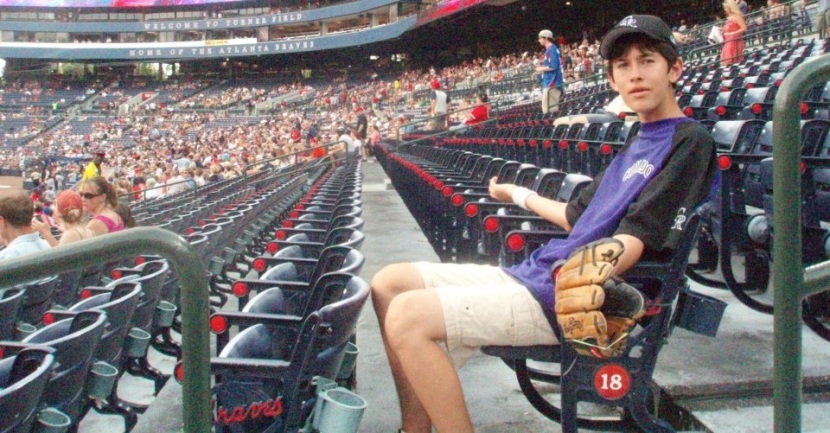 For the record, I did catch a foul ball, which to this day remains the only foul ball I have ever technically “caught on the fly” off of the bat of Nate McLouth. If  you want to check out the gallery from that July 5th game, I’ve linked this entire sentence to the page. Heck, I might as well give you the July 6th gallery while I’m at it. Here’s that link. I was also with my mom for this whole roadtrip, who wanted me to sit with her, but otherwise I might have gone to the cross-aisle once this section filled up a little.

Special thanks goes out to Todd Cook for allowing me to use many of his panoramic pictures in the entry from his plethora thereof. If you want to check out his gallery of 10,000,000 pictures and more, check out his museum by clicking on the words you just read.

Anyway, that’s that. Keep voting for the entries you would like to see:

If you have already voted and have a different perspective, I have taken the repeat voter restrictions off and they will remain off for 24 hours after the publication if you want to vote again. However, I do please ask you to only vote one additional time.

And although Ballhawk Interviews is the next most voted subject, I still have to ask you guys who you want to see interviewed, so in the meantime, I will do an entry on whatever the second most voted on item is in the poll (hint, hint, for those people voting a second time). Meanwhile, here is a poll to let me know which ballhawk you would want to see me interview:

Finally, since Ballhawking Gear is one of the entry types that is in second place, keep voting on how you would like to see it: